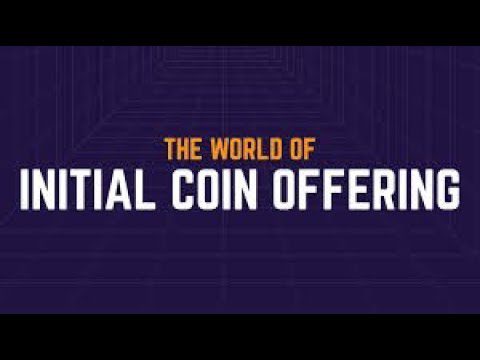 http://spectretrading.com Just as blockchain, the technology that underlies bitcoin and other cryptocurrencies, continues to show potential in transforming many industries, it is also showing its potential in the crowdfunding and investment domain.

Initial Coin Offering (ICO) has become a popular way to raise funds for projects that are based on blockchain and cryptocurrencies. An ICO is a cryptocoin crowdsale, where a blockchain-based project allows enthusiasts and supporters to invest in the project by purchasing part of its cryptocurrency tokens in advance. ICOs usually take place in the early phases of a project, and the raised funds are then used to pay development and launch expenses.

One of the most successful examples was the famous cryptocurrency project Ethereum, which raised $18 million in ICO and reached an approx. $1 billion market cap in 2016.
What’s the difference with other forms of investment?

ICOs are often compared to crowdfunding and IPOs. But while they have common traits with all of those, they are unique in their own way and bring innovations to the investment landscape that weren’t possible before.

They resemble IPOs (Initial Public Offering) in that they are used to sell a stake and raise money, and they offer investors potential profit in exchange for a risk and possible failure to deliver on the promise.

However, ICOs are also different from IPOS and resemble crowdfunding campaigns in the sense that they are supported by early enthusiasts that want to invest in a product or service that hasn’t been launched yet. However, as opposed to crowdfunding which is basically a sort of donation, participants in ICOs have a financial stake and hope to obtain a return on investment for their contribution.

Therefore it is safe to assume that an ICO is a mix between donation and investment, somewhere between IPOs and Kickstarter.
How does it work?

ICOs are usually announced on cryptocurrency forums such as Bitcointalk, where the project team presents their idea along with a whitepaper and other documentation, timelines, goals and other information that will help potential investors understand and evaluate the project. Since ICOs happen before project completion, being transparent and comprehensive about the details of the project is key to gaining trust and appreciation.

After the ICO’s launch, cryptocurrency tokens are made available for sale and will have value in the future for those who will work with the platform. The preferred currency for ICOs is bitcoin.

ICOs last at least a few weeks and the project tries to raise as much money as possible. In some cases, ICOs will place a cap on the total amount raised (a good practice). If the ICO manages to raise sufficient funds, the project goes ahead to the next step.

Once the ICO is completed and the project launched, the ICO tokens get listed of cryptocurrency exchanges to trade against other cryptocurrencies. The price usually reflects the overall cryptocurrency market sentiment, project-specific news, and the addition of new features.

Developers who will later want to develop their own applications on top of these platforms are usually drawn to ICOs.
What’s the advantage of ICOs?

ICO is a great way to bootstrap a blockchain-based project and gain the initial capital necessary to gather a talented team and get started. It is possible to raise as much as a round of Silicon Valley seed funding. The difference, however, is that you do not need to give up equity for the money you raise.

ICO removes many of the hurdles present in the VC process and allows startups to short-circuit their way to the market by directly presenting the idea to potential customers. This way, the process will also provide a way to gauge general interest on the project in the same way that presale works for Kickstarter projects.

Also, due to the open-source nature of blockchain projects and ICOs, there exists the ability to fork and create similar projects that are slightly different and can cater to the preferences of more targeted audiences in order to weigh the market viability of different variations of the project.
What’s the pitfall?

The problem with ICOs is that many of them have turned out becoming scams, ideas that never materialized or failed to deliver on their promises. Building on the hype surrounding cryptocoins in general, many teams launched projects that weren’t even centered on a solid idea, and not enough research was done to prove the viability of the project.