Ripple, and its XRP digital token, have weathered the recent bitcoin and cryptocurrency storm better than many others, bolstered by XRP’s huge gains earlier in the year.

But ripple, a common name for XRP, has still struggled amidst an almost year-long crypto rout that has wiped more than $700 billion from the total cryptocurrency market capitalization over the course of 2018—despite a raft of banks and financial services companies signing up to Ripple.

The expectation (and subsequent disappointment) that adoption of cryptocurrencies as a tool of exchange would follow the bitcoin bull run has contributed to this year’s sell-off of digital tokens.

XRP is down some 80% from its peak as most major cryptocurrencies readjust after last year’s huge bull run. The ripple price surged to more than $3 last year, up from just $0.006 it began of 2017. 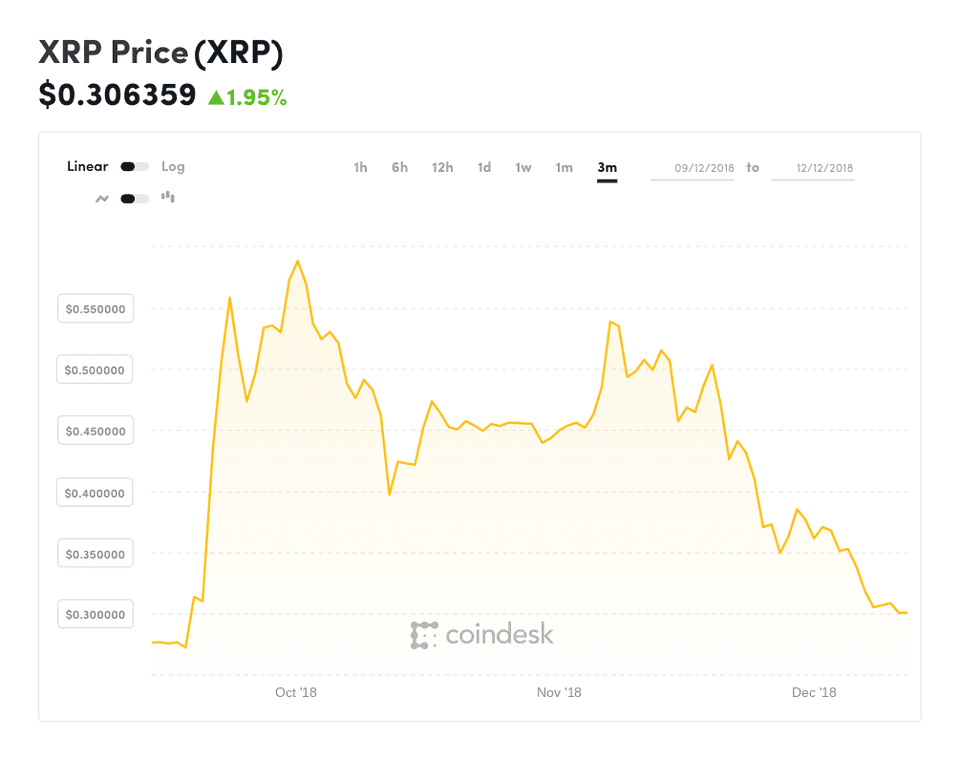 The ripple (XRP) sudden price rise in September failed to hold, with its value dropping again in November.

Some now fear that cryptocurrencies’ current problems of clunky exchanges, high risk and low regulation environments, and pricey fees could put people off for good, even if these problems are eventually solved.

“I don’t want the adoption to get ahead of the technology. It took a long time for the internet to get to the point where it was suitable for anybody to use it and you didn’t have to really understand the technology in great detail in order to be able to get it to work,” Schwartz told the Internet History Podcast.

Ethereum spent most of 2020 outperforming Bitcoin by a large margin, thanks to the burning hot DeFi trend and the...

Ethereum is in the process of trying to reclaim its key $380 support level following a brief dip below it...

Chainlink has recovered from its recent lows and is in the process of pushing higher despite seeing a strong selloff...

Bitcoin has undergone a strong correction from the highs of $13,850 set earlier this week. At yesterday’s lows, the cryptocurrency...

Bitcoin smashing through $12,000 gave the cryptocurrency enough momentum and energy to take out $13,000 and revisit last year’s highs....