SushiSwap (SUSHI) has dropped 14% in the past 24 hours as Ethereum has slipped lower. The leading decentralized finance-focused cryptocurrency is the worst-performer in the top 100 cryptocurrencies by market capitalization.

Despite the strong drop in the SUSHI price, the <span class="wpg-tooltip-term-title">Coin</span></h3><div class="wpg-tooltip-content">A coin is a unit of digital value. When describing cryptocurrencies, they are built using the bitcoin technology and have no other value unlike tokens which have the potential of software being built with them.<p class="wpg-read-more"><a href="https://www.newsbtc.com/dictionary/coin/">» Read more</a><p></div>”>coin remains up over 25% in the past seven days. This 25% performance makes it one of the better-performing digital asset in the top 100, aside from coins like AAVE, NXM, Ethereum, Synthetix Network Token, Polkadot, and Dogecoin.

SUSHI is dropping as Ethereum has slipped from highs near $1,200 to $1,000 as of this article’s writing. Earlier today, the cryptocurrency traded below the key psychological level of $1,000. 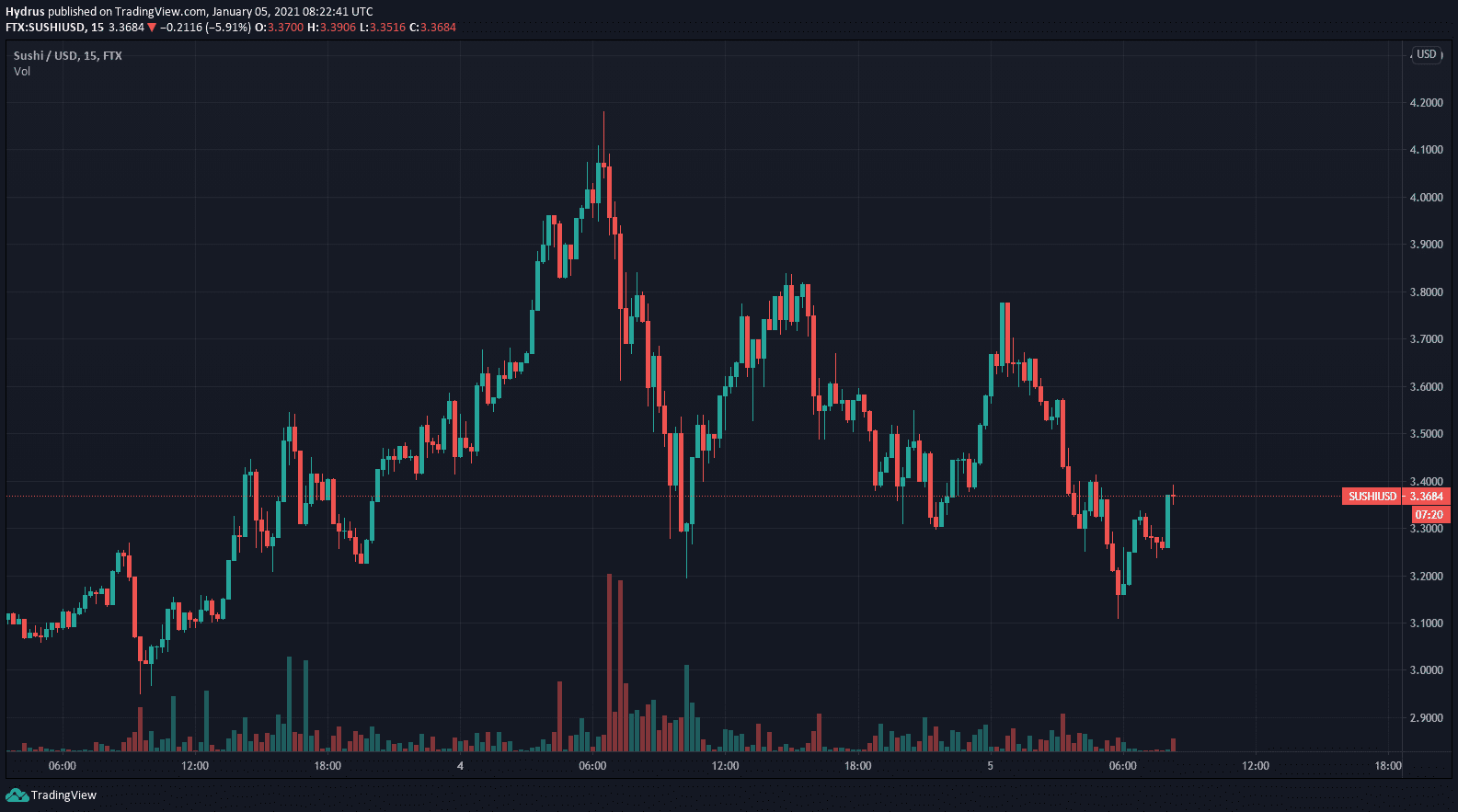 SUSHI traded as high as $4.15 on leading exchanges yesterday as Ethereum shot higher. The cryptocurrency was seeing large capital inflows from Bitcoin into ETH, then into these DeFi plays.

SUSHI’s price action remains extremely volatile, swinging between key price levels one after the other.

This drop in the price of SUSHI comes in spite of broader positive trends for SushiSwap.

“BoringCrypto,” a contributor to the protocol, explained on December 21st that he is getting ready to release BentoBox. BentoBox will be a “single vault that holds all tokens” for a number of purposes, including but not limited to a money-market for margin trading.

The first application for BentoBox will be a lending solution that will allow users to margin trade (long or short) long-tail assets listed on SushiSwap. This is expected to be bullish for SUSHI because fees from this segment of the protocol will likely accrue to holders, which should thereby increase the cryptocurrency’s price.

The contracts for this application are currently under audit:

“The smart contracts for BentoBox are currently under audit by Quantstamp and Peckshield. The Peckshield audit is wrapping up with all issues addressed. The Quantstamp audit will probably wrap up in early January… Realistically, I’m hoping to see the first release go out in mid January.

The first release will give access to the basic features of BentoBox Lending for a predefined set of collateral-asset pairs.”

Ethereum broke out over the weekend and looks primed to follow in Bitcoin’s footsteps by shattering its former all-time high...

Ethereum corrected lower sharply from a new all-time high at $1,166 against the US Dollar. ETH price remained well bid...

This Eerie Ethereum Fractal Suggests The Top Is In… For Now

Once Bitcoin finally began to cool off, capital began to flow into Ethereum causing an enormous breakout. The rapid rise...

TA: Ethereum Prints Bullish Break: Why ETH Could Surge Above $1,200

Ethereum started a fresh increase above $1,050 against the US Dollar. ETH price is showing positive signs and it is...