Ethereum Rallies Towards All-Time Highs as BTC Stalls; What Analysts are Saying

Ethereum and many other altcoins have been caught in a wild uptrend throughout the past few days and weeks.

Buyers and sellers had both been struggling to gain firm control of ETH’s price action, with the recent breakout rally marking a firm end to this previous trend.

Despite being bullish on ETH in the mid-term, one analyst is now noting that there’s a possibility it will pull back before it can gain further momentum.

This possibility is rooted in an analysis of Bitcoin’s price action when it moved to break its local highs in late-2020.

At the time of writing, Ethereum is trading up just under 12% at its current price of $1,407. This marks a notable rebound from its recent lows of $900 set just a few weeks ago.

The crypto is now in the process of taking outs its previous local highs.

This doesn’t come as a surprise, but there is some resistance within the mid-$1,400 region from bears looking to defend against a break above these highs.

Once flipped to support, however, ETH could gain parabolic momentum similar to that seen by Bitcoin and multiply its previous all-time highs.

One trader mused the possibility that Ethereum will follow in Bitcoin’s footsteps and slide lower after taking out its highs before seeing further momentum.

“The high has now been taken. Let’s see the ETH response from here. BTC spent 24 hours around its high before eventually selling off so not expecting an immediate response. Bulls (and me) hoping for a power through instead of a grind here.” 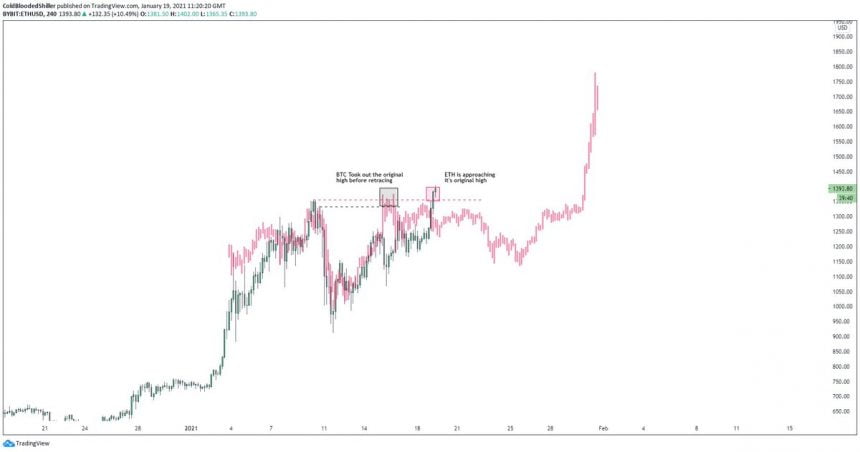 The coming several days should provide some insights into Ethereum’s outlook, which Bitcoin will undoubtedly play some role in shaping.

Ethereum traded to yet another all-time high at $1,950 against the US Dollar. ETH price is correcting gains, but it...

This week, transaction fees on the Ethereum blockchain grew to a level that made the decentralized applications (dapp) operating atop...

Ethereum broke the $1,850 resistance to continue higher against the US Dollar. ETH price traded to a new all-time high...

TA: How Ethereum Could Stage A Strong Surge Above 1,800

Ethereum is struggling to gain pace above $1,800 against the US Dollar. ETH price remains well supported and it is...