Forget Bitcoin and Ethereum, Dogecoin (DOGE) has been on an absolute tear over the past few days.

Just look at the chart below, which shows that the meme cryptocurrency is up more than 150% in the past three days. As of the time of this article’s writing, it’s trading at $0.048, but set a local high at $0.056 on Tuesday. 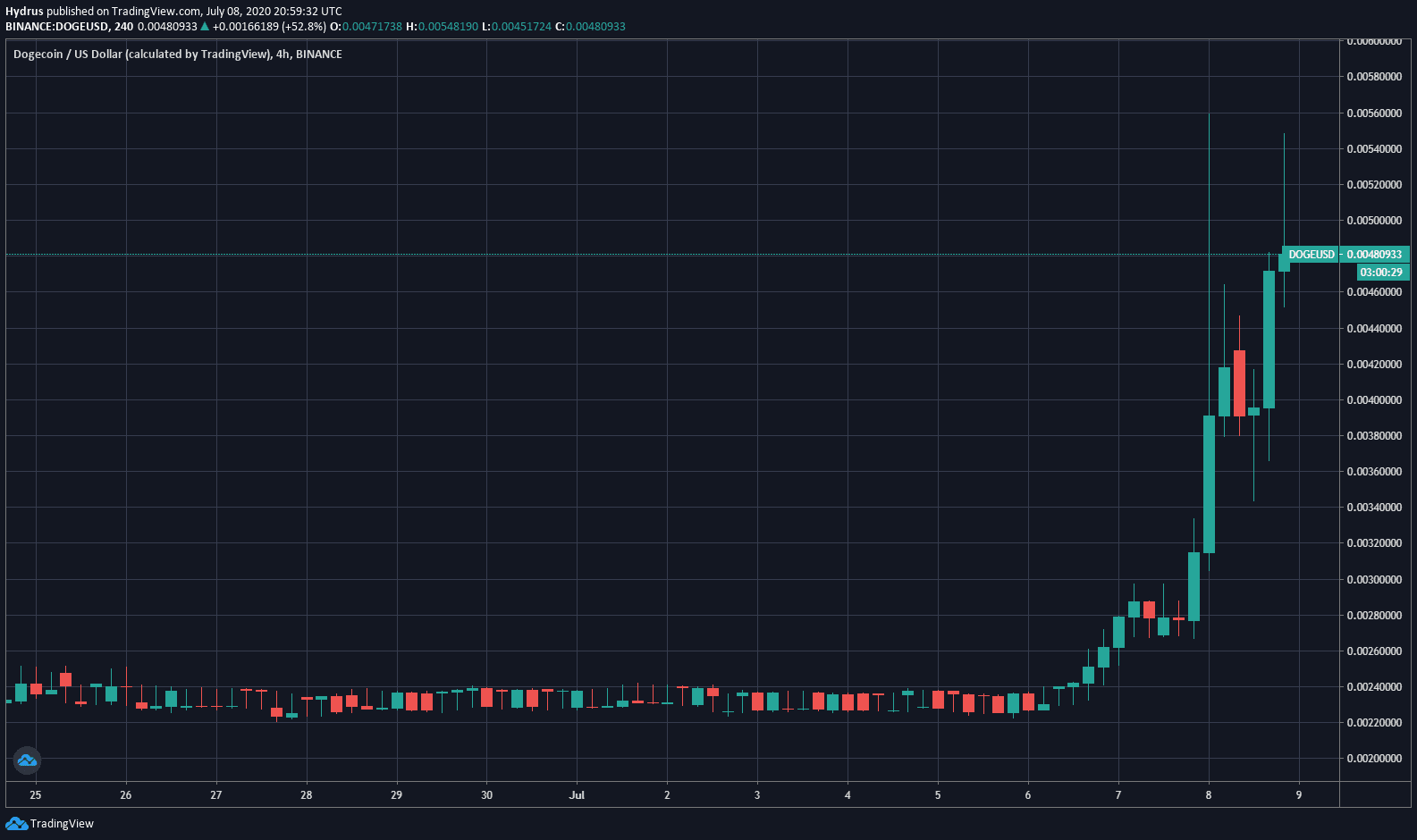 Dogecoin, which is Tesla CEO Elon Musk’s “favorite cryptocurrency,” is benefiting from an influx of mainstream coverage spurred by TikTok users.

A user on the platform with the moniker “Jamezg97,” whose profile picture is none other than the Dogecoin logo, released a video last week shilling the crypto. It isn’t clear if he was serious, but the user called the cryptocurrency a “stock” that is “practically worthless.” Jamez said that if all TikTok users buy the asset and it goes up to $1.00, one can “get rich.”

The video has gone semi-viral on the video-sharing platform, with other users following suit advising their followers to buy the cryptocurrency.

But Dogecoin has just reached a whole new level of popularity with a mention by Jake Paul.

Dogecoin Is Getting Mentioned by Jake Paul, Bloomberg, and More

According to a screenshot shared by Joe Weisenthal, a Bloomberg editor that has long been following crypto, Youtuber Jake Paul is “pumping Dogecoin on Instagram.”

“This is gonna go crazy.”

It isn’t only Jake Paul who is hopping on the DOGE train.

“Seeing a lot of people point out that DOGE has a large circulating supply, and assume it is hard to pump. That is untrue, not only a good chunk of amount of DOGE supply is dormant+lost, and on exchange ask orders are very thin, the actual liquid market cap is significantly lower.”

Anybody else getting 2017 vibes, or is it just

Ethereum recovered nicely above the $380 and $390 levels against the US Dollar. ETH price must surpass the $400 barrier...

Ethereum transaction fees have continued to surge as decentralized finance (DeFi) has continued its ascent to the crypto mainstream. Fees...

Ethereum Could Soon Burst Past $400: This Eerie Fractal Shows Why

Ethereum is preparing for another massive breakout, according to a fractal analysis by a cryptocurrency trader. This comes after ETH...

Ethereum has been consolidating alongside Bitcoin and most other major altcoins throughout the past several days. This consolidation phase comes...

Ethereum has been hovering around the $390 region throughout the past several days and weeks, struggling to break above $400...