The recent Bitcoin rally to as high as $42,000 has been predominantly been driven by institutional investors suddenly waking up and realizing the asset’s long-term value potential. Buying in now, means not paying ultra-high prices some day down the line if it ultimately catches on.

And while FOMO from wealthy individuals seeking to protect that wealth has been rewarding for cryptocurrency investors, the ongoing centralization of BTC and wealth could have dangerous consequences down the line, that the asset’s creator had sought to avoid. Here’s why the wave of institutional buying might not be as positive as it seems on the surface.

The Great Wealth Transfer From Cash To Bitcoin, Nothing More

Bitcoin price is trading at $37,000 per <span class="wpg-tooltip-term-title">Coin</span></h3><div class="wpg-tooltip-content">A coin is a unit of digital value. When describing cryptocurrencies, they are built using the bitcoin technology and have no other value unlike tokens which have the potential of software being built with them.<p class="wpg-read-more"><a href="https://www.newsbtc.com/dictionary/coin/">» Read more</a><p></div>”>coin currently and has never been in higher demand, all while the world is still under the grips of a global pandemic. Unemployment has also never been higher, and normal everyday citizens are clamoring for stimulus money to help them pay the bills, or to cover the cost of food and other basic necessities.

Yet more capital is flowing into Bitcoin than ever before. And unlike 2017, it isn’t only retail money. Retail investors are back, but the price per BTC is even higher this time around. They aren’t the ones buying up a massive share of the limited cryptocurrency’s supply at these levels.

They’re buying negligible amounts that do contribute to the overall upside momentum, but the price appreciation has predominantly been due to wealthy institutions buying Bitcoin in large sums.

Massive OTC buy orders taking place behind the scenes are taking what little supply out of the market that used to be sold. It has made a lot of early crypto investors and retail investors who survived the <span class="wpg-tooltip-term-title">Bear</span></h3><div class="wpg-tooltip-content">Bear market is defined as a decreasing set of prices for various types of assets. A bearish investor wants to profit from the movement of dropping prices. You can think of a bear, swinging his big paw downward on the investment, crushing prices.<p class="wpg-read-more"><a href="https://www.newsbtc.com/dictionary/bear/">» Read more</a><p></div>”>bear market wealthy, and that’s been a positive change in global wealth distribution.

However, with whales absorbing such a sizable share of the Bitcoin supply, in isn’t the same decentralized asset that caught the attention of early evangelists hoping for a better financial situation for all.

Bitcoin as a technology enables a free financial future, but because it is offered on a free market – as it should be – over time it is coming into possession and therefore the control of the world’s currently wealthy.

The cryptocurrency’s original creator, <span class="wpg-tooltip-term-title">Satoshi</span></h3><div class="wpg-tooltip-content">Satoshi Nakamoto is the founder and creator of bitcoin, the most popular cryptocurrency. The smallest amount of bitcoin (0.00000001) was also named after him, it is called a Satoshi. This tiny amount of bitcoin is one hundred-millionth of a bitcoin. That’s 7 zeros before the number 1! Satoshi Nakamoto is an unknown person or group of people who created bitcoin in 2009. Very little is known about Satoshi. In an online profile he claims to be a Japanese man born in 1975, but all of his software and online conversations are in perfect English.<p class="wpg-read-more"><a href="https://www.newsbtc.com/dictionary/satoshi/">» Read more</a><p></div>”>Satoshi Nakamoto sought to free the world from third-party’s control over money. But if most of the Bitcoin supply is owned by the few, has the distribution of wealth at all been affected by its emergence as originally intended? 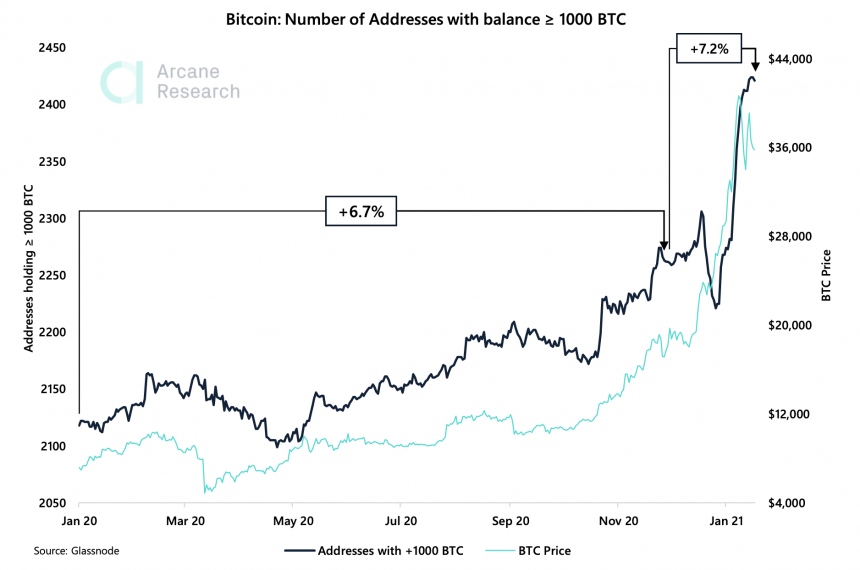 Bitcoin could have made them that wealth, and that’s wonderful. But will cryptocurrency evangelists cheer when the bulk of the supply is controlled and centralized at corporate treasuries and not citizens seeking financial freedom?

Over 2400 wallets own 1,000 BTC or more, for a combined 2.4 million of the 21 million total Bitcoin supply. That means only 2400 individuals or entities posses as much as 10% of the most scarce resource to ever exist.

And while these entities are pumping the price of Bitcoin for any crypto investors who got in before they did, the original intent of Bitcoin is becoming clouded by increased centralization of the same old wealth.

Without a real changing of the guard, the cryptocurrency will have failed at least a portion of its original mission.

Bitcoin bulls are not running out of fuel. On Friday, traders once again raised their bids for the world’s leading...

Bitcoin bulls are not running out of fuel. On Friday, traders once again raised their bids for the world’s leading...

Bitcoin is making headlines left and right on media outlets everywhere, but none more so than CNBC. According to a...

Bitcoin is making headlines left and right on media outlets everywhere, but none more so than CNBC. According to a...

Bitcoin price gained bullish momentum above $50K and traded to a new all-time high at $57,500 against the US Dollar....