Bitcoin Price Surges 20% to $4.8k in Minutes: Is the Bear Trend Officially Over?

The bitcoin price recorded a massive surge from $4,200 to nearly $4,800 within minutes, demonstrating a 20 percent gain in a short time frame. 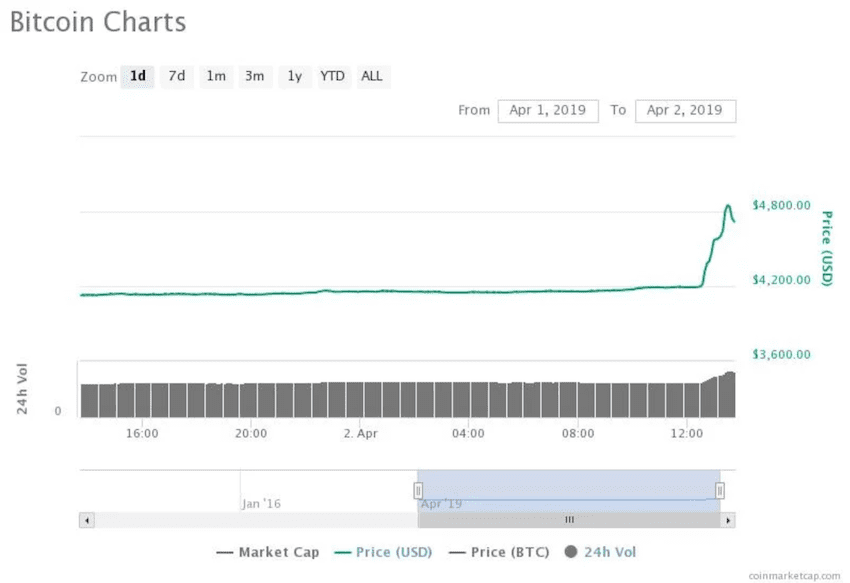 Bitcoin surges 20% in a matter of minutes, fueled by a short squeeze (source: coinmarketcap.com)

The $4,200 resistance level, which bitcoin has struggled to break out of for more than four months, was broken cleanly for the first time on early Tuesday morning, which led most technical indicators to turn and allow the dominant cryptocurrency to surge substantially.

IS THE BITCOIN BEAR TREND OVER?

Earlier this week, economist and global markets analyst Alex Krüger said that a price movement of bitcoin above the $4,200 level will mark the end of the bear trend beginning January 2018, lasting 16 months.

“This is not a call. Not a matter of aging well or not. A break above $4,200 technically ends the bear trend that started Jan 2018. Facts don’t care about opinions. If strong selling resumes later on, that would represent a different trend,” he said.

That’s what no resistance looks like. Nothing but hot air above 4200. The longer the wait, the harder the break. This is what technical analysis is for. $BTC +20% in 45 minutes.

On Monday, a technical analyst in the cryptocurrency market said that an $80 million sell wall was awaiting above $4,200, and buyers had to absorb $80 million to push the bitcoin price above the highly anticipated resistance level.

Once the level was broken, it triggered a short squeeze on major trading platforms, intensifying the upside movement of bitcoin.

CAN BITCOIN RISE EVEN FURTHER?

Precious metal dealers in the political and protest torn Hong Kong claim that the wealthy are moving gold offshore following...

US Dollar Could See Bearish Reversal: Is A Bitcoin Reckoning Coming?

The dollar has been in sharp decline. Analysts are calling for the global reserve to lose its crown to the...