Will Bitcoin Reach Another High in 2019?

Bitcoin was a big disappointment in 2018. For investors on the bullish side of the market that is.

After starting the year near an all-time high, the “people’s currency” entered a bear market, hitting one low after another. And dragging along scores of other cryptocurrencies.

But with prices stabilizing in the last few days, which coincides with Bitcoin’s peak last year, some bulls are encouraged that the bear market may be over.  Reghav Jerath, Founder and CEO of Gath3r, is one of them. “The current market decline is just a phase,” Jerath says.“In its short history Bitcoin has corrected 80-90% many times over. This is just another bump in the road and was overdue.” 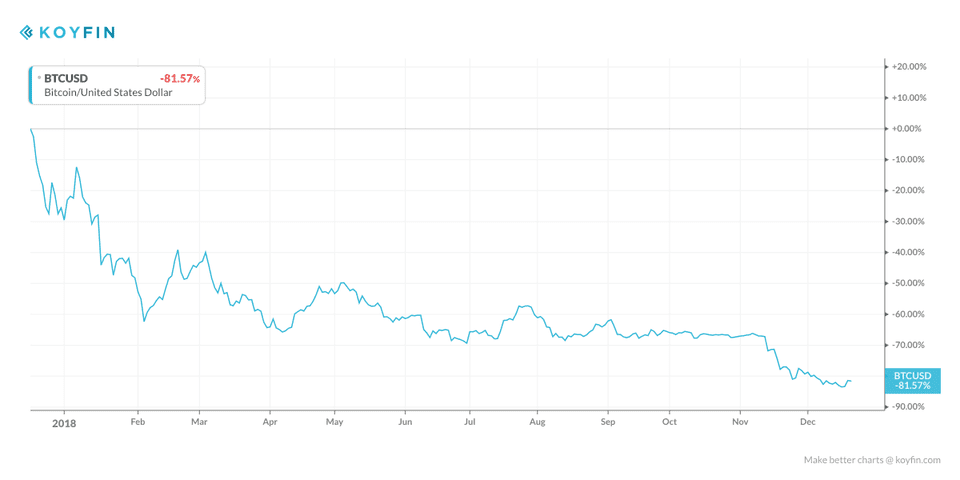 Jerath doesn’t have a price target for Bitcoin, but he thinks it will remain the dominant cryptocurrency.“Bitcoin as a first mover and the underlying technology can solve a lot of problems,” he adds. “While there are issues that need to be addressed such as scalability, there are a lot of real achievements occurring.”

This view is consistent with a recently published A.T. Kearney report, which expects Bitcoin to regain its market dominance in the cryptocurrency markets by the end of 2019. In terms of market capitalization, that is.

Regaining market dominance, however, doesn’t mean that the cryptocurrency will head to new highs any time soon.

The reason? Bitcoin and other cryptocurrencies have failed to address a big problem: how to gain broad acceptance by a critical mass of users.

Thus far, none of the major digital currencies have solved this problem, failing to gain acceptance beyond the “technology enthusiasts,” a small group in the “Rogers Curve” — a model marketers use to explain how new products reach the masses.

That means the momentum behind Bitcoin, which sent its price sky high last year, was simply hype about the Bitcoin’s potential to change the world.

And as reality settles in a year later, Bitcoin’s potential remains just that — potential. The only difference is that the market valuation of Bitcoin has changed.

“Bitcoin holds a big promise of sovereign and sound money – the bubble we experienced a year ago was an unfortunate consequence of human greed and short-term thinking,” says Clement Thibault, Senior Analyst at Investing.com. “Bitcoin hasn’t changed in the past year and it remains the same asset, whether it’s worth $20K or $3K. It’s potential and usefulness haven’t diminished with the price.”