The Bitcoin halving is right around the corner, less than three total months away. The event is said to cause extreme bullishness and could send Bitcoin to prices of $55,000 or higher shortly after the event takes place.

But while crypto analysts are expecting a massive rally following the Bitcoin halving, the last halving was the start of yet another crypto winter, before the bull market truly began.

Shock and Awe: Bitcoin Halving Expectations May Not Match Reality

The upcoming Bitcoin halving in May 2020 might take crypto investors by surprise.

The digitally-coded event will slash the block reward miners receive for validating each new block added to Bitcoin’s blockchain by half.

Related Reading | Analyst: Crypto Market Pullback Imminent But May Not Occur For Months

This doubles the cost of production per BTC overnight.

Because of the cost of production so largely outweighs the price of Bitcoin, miners stop selling until prices catch up.

The lack of supply creates an imbalance of demand that causes valuations to surge exponentially in the already scarce asset.

Because of this design, Bitcoin is expected to skyrocket in value after the halving.

Stock-to-flow models put the value per BTC at $55,000 or higher immediately following the halving, due to the impact the event has on the limited supply of the cryptocurrency.

And investors are correct, at the core. Each halving has kickstarted massive, year-long rallies that led to new all-time highs after the crypto asset goes parabolic from FOMO.

– Entirely sure our time will come but
– What if we are here, but at 1/7th the speed?
– Are you prepared for a downtrend into next Winter? pic.twitter.com/RuYzWmYpWy

However, it isn’t a situation where the halving happens, and suddenly Bitcoin takes off like a rocket ship.

Instead, what has happened in the past, was that a pre-halving rally led Bitcoin to new local highs, but failed to set a new all-time high ahead of the event. 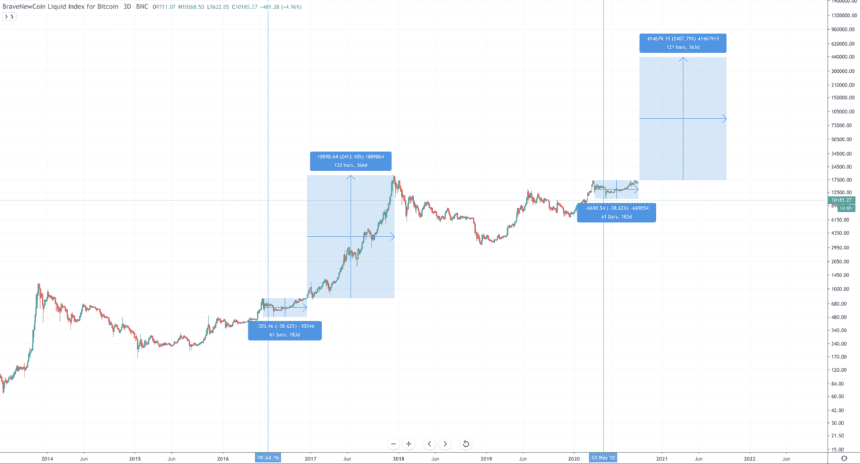 Could Another Six-Month Downtrend Plague the Crypto Market Post-Halving?

Once the Bitcoin halving took place, days later, a massive, steep, 40% selloff happened that took a full six-months to play out.

If a similar selloff happens once again post Bitcoin halving, the price should fall from roughly $18,000 back to $10,500 support, before the true bull market begins.

After this last six-month-long downtrend, the first-ever cryptocurrency experienced limited pullbacks while a parabolic advance reached higher and higher until a new record was set.

Crypto investors looking for an example of this need to look no further than Litecoin. Just ahead of its halving the altcoin experienced a deep selloff that wiped out much of the asset’s pre-halving gains.

However, those that can

Litecoin started a strong upward move from the $41.50 support zone against the US Dollar. The price is now trading...

Bitcoin has seen an absurd bout of price action over the past few days. The leading cryptocurrency, after falling to...

Bitcoin has been expressing tremendous strength throughout the past few days, with its price seeing an unrelenting uptrend that has...

“Massive” Wave Of OTC Buying Could Be Behind Bitcoin Bull Impulse

Yesterday, Bitcoin experienced a major breakout through $12,000 and in a flash was trading above $13,000. Buying on exchanges is...

Bitcoin shocked the finance world yesterday rocketing more than $1,000 to over $13,000 per BTC at the high. Today, Ethereum...

“Massive” Wave Of OTC Buying Could Be Behind Bitcoin Bull Impulse