World’s third largest cryptocurrency Ripple (XRP) has appreciated up to 31-percent against the US dollar in just two days.

The XRP-to-dollar exchange rate Tuesday established an intraday high towards $0.405, up 25.05% since the market open on Luxembourg-based Bitstamp exchange. The pair dropped as much as 5.05-percent ahead of the European session to neutralize its overbought sentiments, finding interim support at $0.384-level. 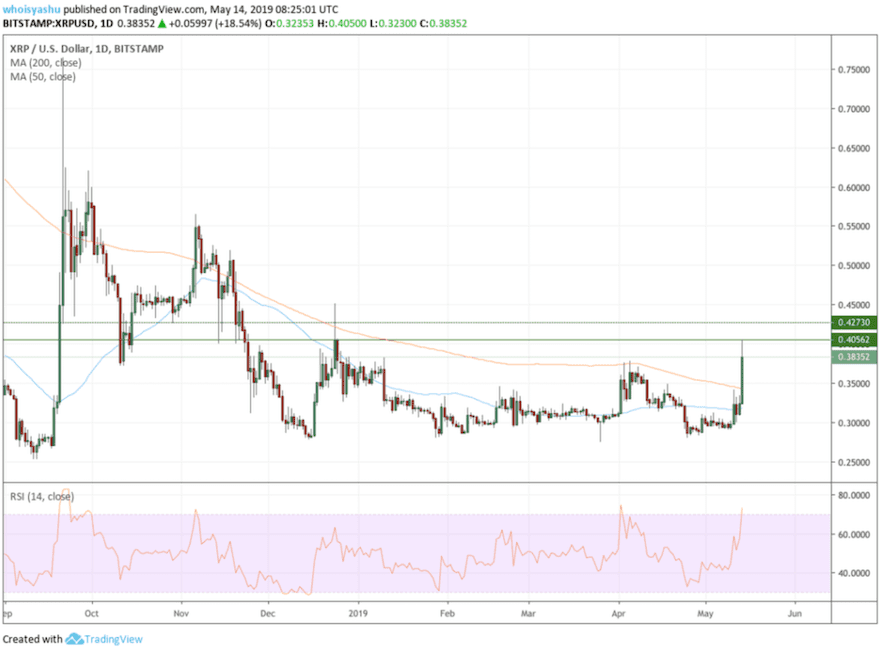 The sentiment was the same across the rest of the cryptocurrency index, with almost all the leading cryptocurrency posting surplus intraday gains. Bitcoin (BTC), for instance, extended its rally action to establish a new 2019 peak towards $8,836.19. Ethereum, EOS, and Bitcoin Cash too recorded double-digit percentage gains on a 24-hour adjusted timeframe.

The cryptocurrencies’ breakout action further came with a rise in trading volume, confirming a strong bullish bias across the market. Exchanges trading XRP-enabled pairs noted $3.69 billion worth of buying and selling activity. Meanwhile, data on Messari.io, which excludes manipulated volume statistics, showed $127 million value of trades in the last 24 hours.

At the time of this writing, XRP price was hinting to extend its upside momentum, consolidating sideways while trading at $0.385.

The asset found additional fundamental support from Boerse Stuttgart. Germany’s second-largest stock exchange on Monday launched two exchange-traded notes for XRP and Litecoin’s LTC each. As if that was not enough, Boston-based asset management company, Fidelity Investments, expressed the possibility of offering XRP trading services to its institutional clients.

Fidelity is planning on listing $XRP and there will be heavy investing in it, along with the recent Coinbase news of allowing New York residents to buy Ripple, I feel it’s safe to start building a position in XRP now https://t.co/TMGL8tuCbs

The reports improved buying sentiments in the XRP market, at least in the last two days. They also served as primary factors to drive the asset’s upside run further, making it attractive for investors to build their XRP positions.