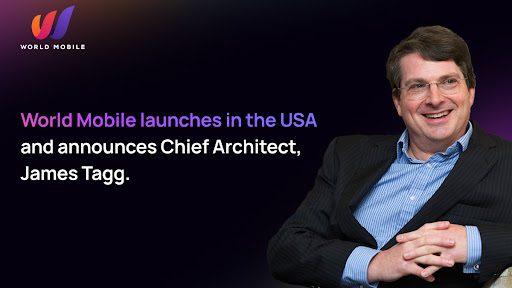 (London, UK, 2 June 2022) : World Mobile is proud to onboard inventor and expert in the communications and telecommunications field, James Tagg. James Tagg is a technology entrepreneur, inventor, and author with expertise in man-machine interfaces, and quantum artificial intelligence. He is one of the inventors of the touchscreens found in all mobile phones and made the first VoIP call on a mobile phone. His passion and dedication to his work will bring unparalleled experience to the team with the launch of World Mobile USA.

World Mobile is a telecommunication infrastructure company which aims to build the world’s largest blockchain-based hybrid mobile network. It will deliver universal, affordable, and high-quality connectivity throughout the world, using the $WMT token to facilitate transactions across its network. The project aims to connect the unconnected.

James Tagg spoke about his new role and the vision of World Mobile to use the sharing economy to vastly reduce the cost of delivering connectivity to people worldwide:

“I’m honored to be joining the World Mobile team. Blockchain is a world changing technology, and there’s nothing more gratifying than connecting the globe with this cutting-edge technology.” He further added, “WM has a great vision and, with my background in innovative telecoms, we’re going to completely revolutionise the landscape.”

The US currently takes a traditional approach to telecommunication networks with costly corporate deployed networks. These struggle to keep up with the explosive demand for capacity and have numerous coverage problems. According to Statista, 10% of the population in the United States, has no Internet connectivity and 30% of the countries landmass lacks cellular coverage. It is estimated that a 10% increase in households connected to the Internet can add 1.4% to a country’s GDP. World Mobile’s launch in the United States of America is part of  World Mobile’s roadmap and will bring a disruptive change in the telecommunication industry by utilizing the sharing economy to build the network at a fraction of the traditional cost.

James Tagg brings more than 30 years of success as a technology entrepreneur and inventor, including founding Truphone, the world’s first global mobile operator, and Moonstone, which developed the first projected capacitive touchscreen, now found in almost every mobile phone in the world. He made the first VoIP call on a mobile phone and is one of the inventors of the eSIM. His appointment further strengthens and deepens the expertise at World Mobile.

World Mobile is the first mobile network built on blockchain. With over 3 billion people left offline, digital exclusion is a significant problem. Unlike traditional mobile networks, World Mobile works with local businesses and entrepreneurs, giving them the power to connect their local communities via a sharing economy. World Mobile’s hybrid network utilises both air and ground assets to deliver network coverage in rural areas where previously it was not possible. To learn more about World Mobile, visit