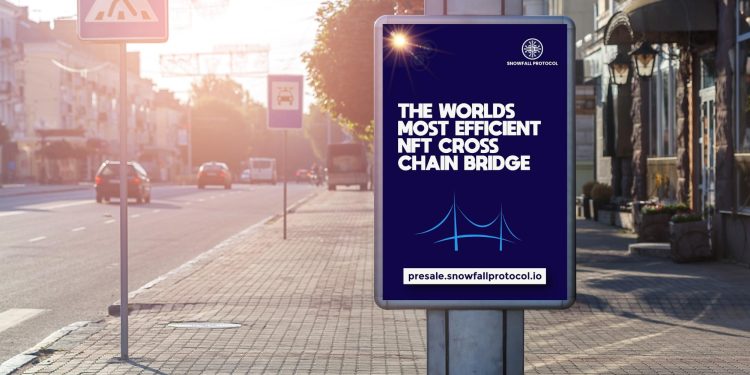 Disclaimer: The text below is a press release that is not part of Cryptotelegraph.com editorial content.The cryptocurrency market has been a rollercoaster ride in recent months, with various coins experiencing highs and lows. In this article, we will delve into three major players in the market: Cardano (ADA), Solana (SOL), and Snowfall Protocol (SNW). While Cardano (ADA) and Solana (SOL) have had their share of challenges, Snowfall Protocol (SNW) has been breaking records and impressing investors.Cardano (ADA) struggles in a prolonged downtrend despite a positive end to 2022Cardano’s (ADA) decentralized finance sector has not been the strongest aspect of its ecosystem, as it only began offering convenient decentralized solutions in the latter half of last year. This was partly due to the underlying technology used for transaction bookkeeping on the network. The current Total Value Locked (TVL) on Cardano’s (ADA) network is $50 million, a significant drop from the all-time high reached in 2022 when the total value of assets on the network reached $350 million. Given the limited variety of decentralized solutions in Cardano’s (ADA) ecosystem, this high value is surprising. In the new year, Cardano’s (ADA) network will release a series of algorithmic stablecoins that are expected to bring much more value to the network than decentralized exchanges or yield farming platforms. If the market recovers in 2023, the TVL of Cardano (ADA) could reach new highs, easily surpassing the relatively modest $350 million seen in 2022. At the time of writing, Cardano (ADA) is still struggling in the market, remaining in a prolonged downtrend despite a good end to 2022. The lack of inflows to the cryptocurrency market and the stalemate of the DeFi and NFT industries have contributed to the decline of Cardano (ADA) in 2022, and will remain a major source of pressure for the coin in 2023.Solana (SOL) continues to face challenges as DeFi and NFT industries shiftThe price of Solana (SOL) has increased by more than 11% over the past 24 hours. The New Year price increase has seen the cryptocurrency reclaim $11 after several days of trading below double digits. However, Solana’s (SOL) New Year boost has not negated the challenges that the “Ethereum killer” has faced in recent months. The cryptocurrency has fallen nearly 20% in the past month and has lost over 95% of its value since reaching an all-time high of nearly $260 in November 2021. Solana (SOL) has dropped from fifth place on the list of largest cryptocurrencies by market capitalization, in November 2022, to 19th at the time of writing. Earlier this month, Solana (SOL) briefly slipped out of the top 20. DeGods, a popular NFT collection that utilizes the Solana (SOL) network, is set to migrate to the Ethereum ecosystem in the first quarter of this year.Snowfall Protocol (SNW) stands out in a crowded market with a strong foundation and growth potentialSnowfall Protocol (SNW) has continued to deliver impressive results, causing investors in struggling projects, like Cardano (ADA) and Solana (SOL), to switch over. To recap, Snowfall Protocol (SNW) sold out its second round a day early. At present, the third round is on track to break this record after selling over 85% of 100 million tokens in a short period. The price of each Snowfall Protocol (SNW) token, which was $0.075 at the start of the round, has also more than doubled, and is currently at $0.182 due to increasing investor deposits. Snowfall Protocol (SNW) is set to officially launch on January 3, 2023. The project has a wide range of utilities and, as a result, has strong price potential. Snowfall Protocol’s (SNW) unique staking mechanism allows holders to earn a share of the protocol’s transaction fees, making it an attractive investment opportunity. Additionally, the team behind Snowfall Protocol (SNW) has a strong track record of delivering on their promises to add value for investors. Overall, Snowfall Protocol (SNW) is a standout project in a crowded market, with a solid foundation and strong growth potential. Its record-breaking performance and innovative approach make it a project worth keeping an eye on in the coming year.ConclusionIn conclusion, while Cardano (ADA) and Solana (SOL) have faced challenges in the market, Snowfall Protocol (SNW) has continued to deliver impressive results and has the potential for massive returns in the coming year. Snowfall Protocol (SNW)’s unique staking mechanism and strong track record have attracted investors and driven price growth.Get in while you can and invest in Snowfall Protocol (SNW) today!!!Presale: https://presale.snowfallprotocol.ioWebsite: https://snowfallprotocol.ioTelegram: https://t.me/snowfallcoinTwitter: https://twitter.com/snowfallcoin