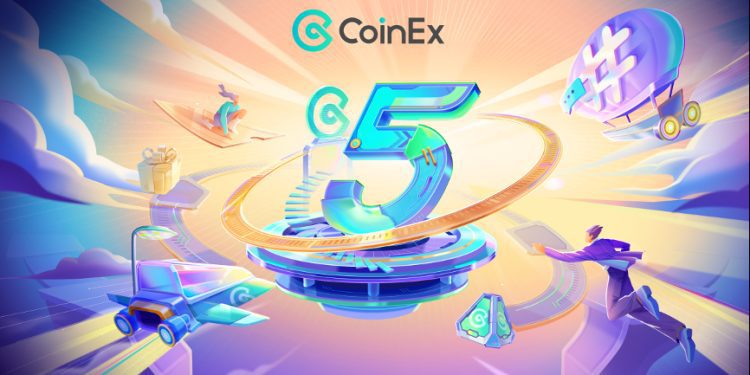 Disclaimer: The text below is a press release that is not part of Cryptotelegraph.com editorial content.Since December 1, CoinEx has launched a series of events themed “To In5inity and Beyond, the Future with You” to celebrate its fifth anniversary together with global users for a whole month. Apart from amazing online interactions and benefits, CoinEx also selected some lucky users to celebrate the exchange’s fifth birthday at the offline party.During the past 5 years, CoinEx has continued to pursue innovation and recorded multiple milestones along its crypto adventure. Today, CoinEx has built a global presence, with services available in 15 languages, covering over 4 million users across more than 200 countries and regions.Ease of use, the biggest appeal of CoinEx, attracts a growing number of users to trade cryptos on the exchange. Thanks to the trust and support of its global users, CoinEx has managed to achieve steady growth over the long term. To give back to all users for their loyal support, the exchange has hosted fantastic offline parties to celebrate its fifth anniversary and create fun memories together with users.Cheer for the Fifth Anniversary and March Toward the Future TogetherCoinEx’s anniversary party will be held in the Philippines, Türkiye, Vietnam, India, Spain, Syria, and Nigeria from December 8 to 18, 2022. The exchange has invited official partners, users, crypto KOLs, associates, and CoinEx Ambassadors from different countries to the party to celebrate its fifth birthday.CoinEx’s anniversary party in IndiaAt the parties, the CoinEx team reached out to over 500 users, conveyed their visions and mission, and received genuine feedback and blessings from users. Through interactions at the offline events, CoinEx brought itself closer to users and impressed them with its brand image featuring “ease of use”.CoinEx’s anniversary party in PhilippinesLooking back, we are touched by the stories between CoinEx and its users. From strangers through acquaintances to close companions, CoinEx and its users have built strong connections and mutual trust. At the parties, CoinEx presented the exchange’s achievements in the past five years through videos and pictures, and expressed sincere gratitude to all users for their continued support. Users also found the parties rewarding as they were able to discuss the future development of crypto together with the CoinEx team and crypto KOLs and share their experiences and insights into crypto investment.CoinEx’s anniversary party in VietnamTo thank its users, CoinEx prepared anniversary gifts and gave away amazing rewards at the parties that pushed the atmosphere to new climaxes. In the end, amidst the blessing of “Happy Fifth Anniversary”, users raised glasses to celebrate the anniversary and shared the anniversary cake to mark this unforgettable moment.CoinEx’s anniversary party in NigeriaFive years marks a major milestone in CoinEx’s brand development. After five years of dedication, CoinEx has now evolved into one of the most noted crypto exchanges in the world. Along the way, the exchange has set brilliant records and achieved outstanding results. Over the past five years, CoinEx has prioritized user experience and focused on delivering easy-to-use products and services, which met the investment demands of its loyal users and made crypto more accessible to beginners. Such efforts have also helped the platform capture extensive market attention. Going forward, CoinEx will remain committed to its original motivations, continue to provide global users with first-rate products and services, and build a crypto trading platform with improved ease of use, security, and stability.