XRP over the last month had some of the strongest week over week performance in the space. The third-ranked altcoin rallied by as much as 45% in one week, outperforming the rest of the entire crypto market.

The asset often referred to as Ripple beating all other altcoins is the perfect underdog story after spending two years as the worst-performing crypto asset bar none. However, according to a potential fractal matching the 2017 crypto bubble, XRP may be about to go on a shocking rally that outperforms Bitcoin by a wide margin.

Ripple’s Recent Recovery Takes Pause, But May Have More To Rally

Bitcoin is booming once again after breaking through resistance at $10,000 and reigniting FOMO across crypto.

After the critical level was taken, the rest of the market followed with major altcoins like Ethereum, XRP, and Chainlink beating out Bitcoin’s returns substantially

Ethereum started the altcoin run, which later helped Chainlink set yet another new price record. XRP in the week following had an over 45% climb in just one week alone, taking the total recovery from the Black Thursday bottom to the current top to over 200%.

Aside from that one week, Ethereum and Chainlink ROI has been much higher. However, a fractal in Ripple could have the asset playing catch up, or potentially outperforming the market again. 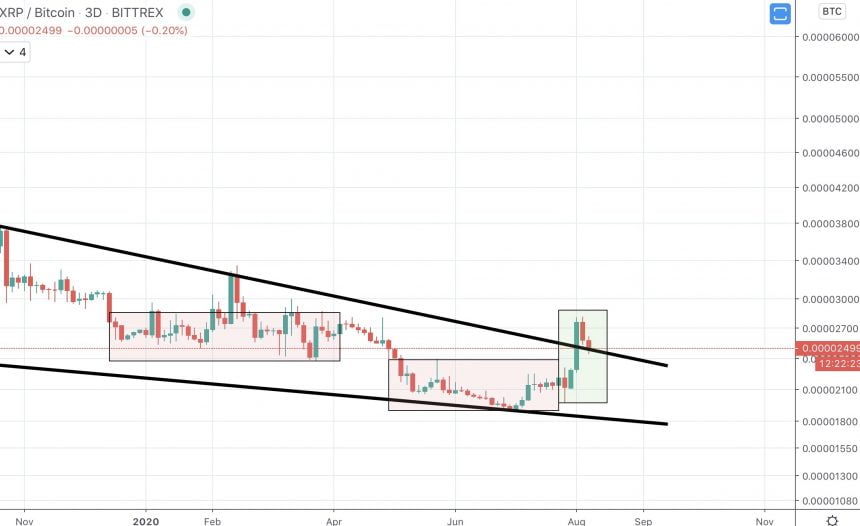 XRP Fractal Forewarns of Repeat Blast Off Against Bitcoin

A fractal discovered may be a forewarning of an incredible explosion in XRP against Bitcoin.

The fractal, playing out on the XRPBTC trading pair, very closely resembles the price action from the previous bottom in 2017, ahead of Ripple’s 2300% surge against the number one cryptocurrency.

On Wednesday, Uniswap shocked the world when it suddenly released its own token: UNI. The Ethereum-based decentralized exchange launched the...

Last night, Uniswap debuted its Ethereum-based UNI token to the world and began distributing 400 of the suddenly hot tokens...

The Ethereum blockchain has become congested after multiple days of low activity. According to GasNow, an ETH transaction fee tracker,...

This Pivotal Level Could Trigger an Ethereum Correction Under $300

Analysts are fearful that Ethereum could drop under $300 despite strength in Bitcoin and legacy markets. Related Reading: This European Crypto...

Ethereum 2.0 Moves Closer But Hoskinson Raises Doubts Over its Security