It isn’t only Cardano, Chainlink, and DeFi coins that are rallying at the moment. VeChain (VET), one of the hottest crypto properties of the last bubble, is up 20% in the past hour alone.

Stepping back slightly, the asset’s performance is even more impressive. As depicted in the chart below, VET is up by more than 100% in the past week, having traded at just under a dollar last Wednesday. Now, the cryptocurrency is changing hands for $0.02 — outperforming Bitcoin, Ethereum, and many others. 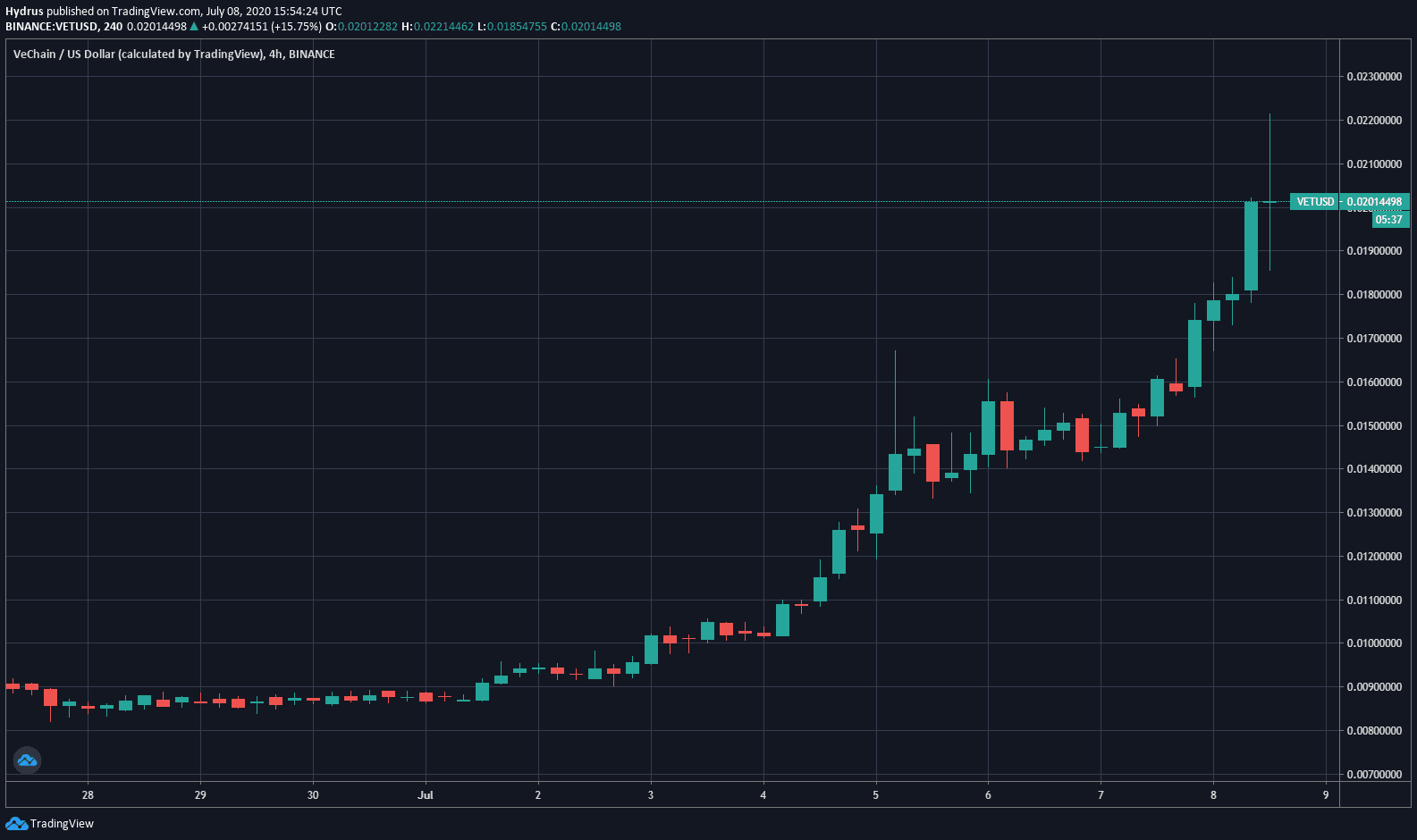 Has VeChain Topped? Analysts Weigh In

With VET’s rally seemingly on a pause, investors are wondering if the cryptocurrency has finally topped after consistent gains over the past week.

Two analysts say it is possible.

One pseudonymous crypto derivatives and altcoin trader shared the chart below in the wake of the latest upswing. It notes that $0.02 is a historical resistance for VeChain, with the asset topping at that exact level twice in the past year.

This was echoed by Michaël van de Poppe, also known as “CryptoMichNL,” whose charts also indicate that VET is at a “range high.” His chart also indicated that the asset’s two-day relative strength index (RSI) reading suggests it is extremely overbought.

This bearish outlook can be corroborated by IntoTheBlock, a blockchain analytics firm.

IntoTheBlock’s dashboard for VeChain, which shows leading on-chain and exchange indicators, suggests that VET is “mostly bearish.” The VeChain network is shrinking, there are few large transactions, and there are more sell orders than buy orders, according to the firm.

VeChain’s Competitor, Cardano, Is Also Up on the Week

VET Is far from the only smart contract cryptocurrency outperforming this week.

As NewsBTC has extensively covered in recent days, Cardano (ADA) has gone parabolic. The asset is trading above $0.10 for the first time in over a year, posting a gain of over 20% in the past 24 hours.

This performance has allowed ADA to pass Bitcoin Satoshi’s Vision, making it the sixth-largest digital asset.

Analyst Luke Martin believes that behind this move is Cardano’s launch of “Shelley,” which activates staking.

“$ADA & $XTZ have been two of the most memorable large cap pumps in the last year. Both come down to one thing: staking/baking. What large cap alt will be the next

Ethereum recovered nicely above the $380 and $390 levels against the US Dollar. ETH price must surpass the $400 barrier...

Ethereum transaction fees have continued to surge as decentralized finance (DeFi) has continued its ascent to the crypto mainstream. Fees...

Ethereum Could Soon Burst Past $400: This Eerie Fractal Shows Why

Ethereum is preparing for another massive breakout, according to a fractal analysis by a cryptocurrency trader. This comes after ETH...

Ethereum has been consolidating alongside Bitcoin and most other major altcoins throughout the past several days. This consolidation phase comes...

Ethereum has been hovering around the $390 region throughout the past several days and weeks, struggling to break above $400...