What a past few weeks it’s been for Ethereum. The second-largest cryptocurrency is up approximately 50% in the past 10 days alone, with bulls finally flooding to purchase ETH after a strong macro bear market.

The asset trades at $382 as of this article’s writing, going effectively parabolic on a macro scale. In the past 24 hours alone, Ethereum has gained 10% against the U.S. dollar, outperforming Bitcoin, which is up by only 4%. 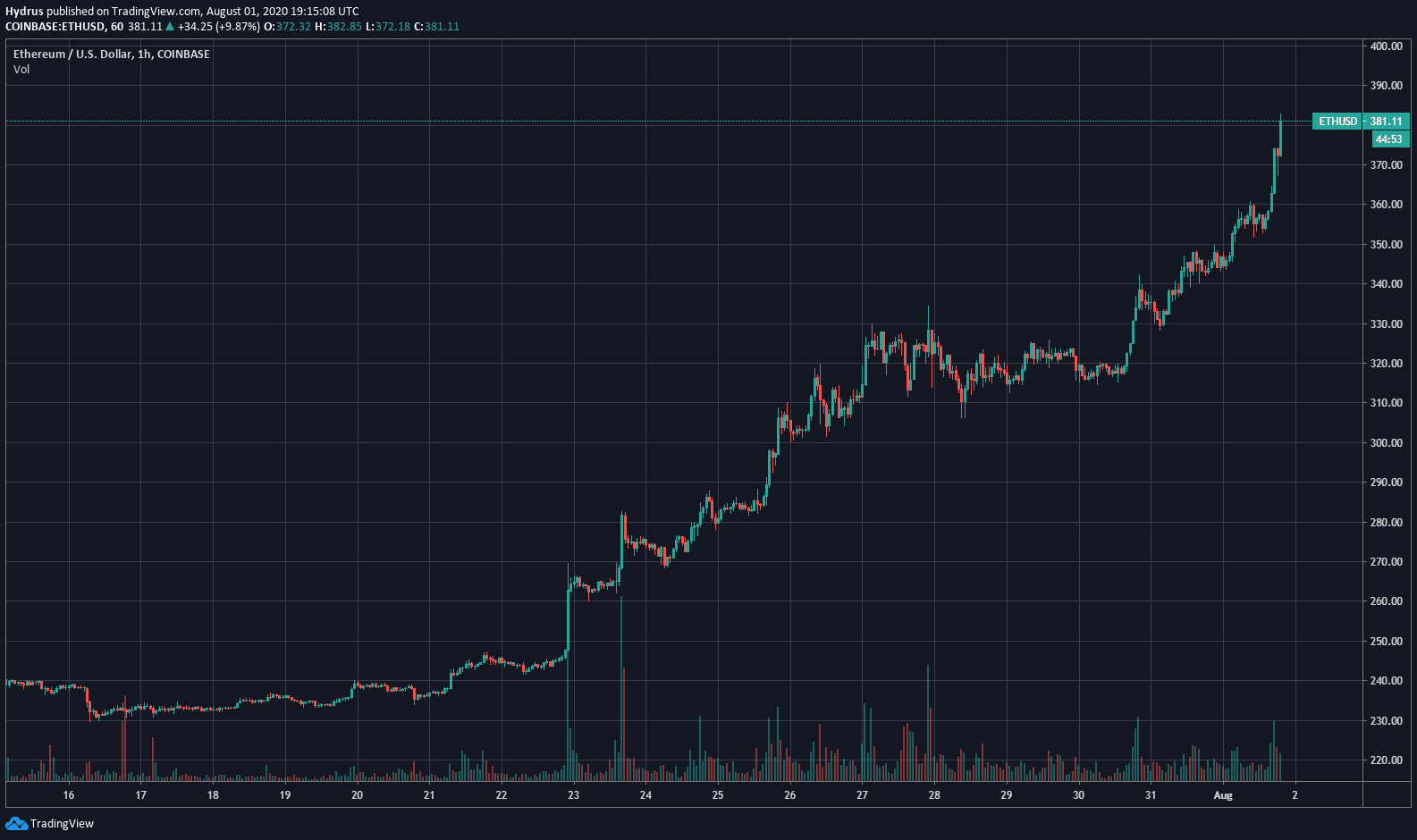 This latest surge higher has had a large impact on the cryptocurrency derivatives market.

According to Skew.com — a crypto derivatives tracker — more than $2.5 million worth of Ethereum shorts on BitMEX- has been liquidated in the past hour alone. This is the largest hourly liquidation event in many days, despite ETH rallying so far in the span of just two weeks.

Millions more worth of short positions were liquidated on other margin platforms like ByBit and Binance, though data from those sites are not actively available.

Analysts are trying to postulate what comes next for ETH as it continues to press higher without fail, liquidating millions of dollars worth of positions put up by Ethereum bears.

What’s Next for Ethereum?

Ethereum has room to rally after breaking past the resistances in the $320-360 range, say many analysts.

One trader, who called much of the rally over the past two weeks, published this chart as Ethereum broke out earlier today. It shows that the asset has scaled past a pivotal resistance, opening the floor to a more than 100% rally towards $800 in the longer run.

Another analyst was more conservative, sharing the chart below as ETH pushed past $370.

The chart suggests that $420 could be a point at which the rally stops due to its historical importance to Ethereum. Though, it’s important to note that this analysis also suggests that Ethereum may have room to rally towards $615, then to $872.

“These are my targets, please stop dming me for them. This is a swing trade for me, i have my position locked in since

Not All DeFi Users Are Committed To Using Ethereum: New Survey

Not All DeFi Users Are Committed To Using Ethereum: New Survey

It’s no secret that Ethereum has benefited the most from the ongoing decentralized finance (DeFi) craze. After all, nearly all...

Ethereum has bounced back quickly after last weekend’s 26% crash from its highs. As of the time of this article’s...

Ethereum’s DeFi Space Is Exploding According to These 4 Metrics

Despite volatility in the Ethereum market, decentralized finance (DeFi) — which some argue is the killer use case for the...

Ripple is rising and trading in a positive zone above the $0.3000 support against the US Dollar. XRP price is...

Things are going from good to better for Ethereum, the second-ranked cryptocurrency by market cap. Bitfinex CTO, Paolo Ardoino today...