Ethereum is facing risks of undergoing a massive plunge as it partially confirms a bearish flag pattern.

The technical setup appears after an asset forms a consolidation channel upward following a strong bearish move. The downward movement is called flagpole, while the consolidation is referred to as the “flag” itself. Ethereum is forming the same pattern, as shown in the chart below. 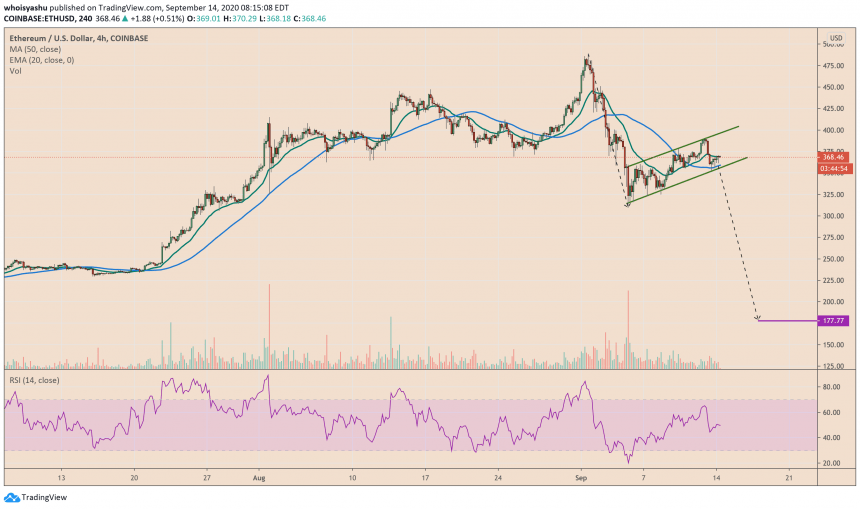 The second-largest cryptocurrency is forming a flag pattern followed by a large slope downwards – a flagpole whose maximum height is near $178. Thereby, if ETH/USD breaks below the upward channel support, then it is at the risk of declining by as much as $178 from the point of breakdown.

That is, at least, according to the technical description of a Bearish Flag pattern. If ETH/USD breaks to the downside today, then its primary downside target sits at $177. Nevertheless, breaking down from a higher level will naturally lift the Flag target as well.

A Bearish Flag, meanwhile, is never 100 percent accurate. For instance, if the upward channel retracement extends

Ethereum has been at the center of some of the largest developments within the crypto market throughout the past several...

While legacy markets and Bitcoin have rejected from local highs, Ethereum has been holding up well. Since the launch of...

The Smarter Solution to Manufacturing: Ins and Outs of Productivist

By decentralizing the supply chain, manufacturing is set for evolution The manufacturing sector is one of those aspects of life...

Despite positive news regarding popular South Korean based cryptocurrency, Icon, a smart contract bug has temporarily crippled the transfer of...