Among the many reasons Bitcoin turned bullish in 2020, was primarily due to the sudden fear of inflation caused by unprecedented money printing. Each new round of stimulus money resulted in yet another massive rally in the cryptocurrency, helping fuel its rise from $3,000 to over $34,000.

Inflation expectation has been in decline ever since the Great Recession concluded, but the metric just broke out from a nearly decade long downtrend that began when Bitcoin was born. Will rising inflation fears keep the cryptocurrency’s price climbing long term?

Inflation Fears Run Amok, Could Cause Bitcoin FOMO To Pick Up Pace

Ever since the Great Recession, central banks have relied on quantitative easing to give the economy a shot in the arm. Each time this is done, however, the total circulating fiat money supply consisting of dollars, euros, yen, yuan and more, begins to inflate.

And as inflation occurs, the buying power of that money decreases. The normal 2% inflation rate is clearly at risk of increasing sharply, and the public is already starting to recognize that goods are beginning to cost more.

The buck – so to speak – is passed onto the everyday consumer who now has to either lower their standard of living or work more hours to compensate for the decrease in buying power.

It was the bank bailouts and money printing of the Great Recession that prompted the development of Bitcoin, and the cryptocurrency over a decade later is now being put to use as a hedge against inflation – the way <span class="wpg-tooltip-term-title">Satoshi</span></h3><div class="wpg-tooltip-content">Satoshi Nakamoto is the founder and creator of bitcoin, the most popular cryptocurrency. The smallest amount of bitcoin (0.00000001) was also named after him, it is called a Satoshi. This tiny amount of bitcoin is one hundred-millionth of a bitcoin. That’s 7 zeros before the number 1! Satoshi Nakamoto is an unknown person or group of people who created bitcoin in 2009. Very little is known about Satoshi. In an online profile he claims to be a Japanese man born in 1975, but all of his software and online conversations are in perfect English.<p class="wpg-read-more"><a href="https://www.newsbtc.com/dictionary/satoshi/">» Read more</a><p></div>”>Satoshi designed it to be. 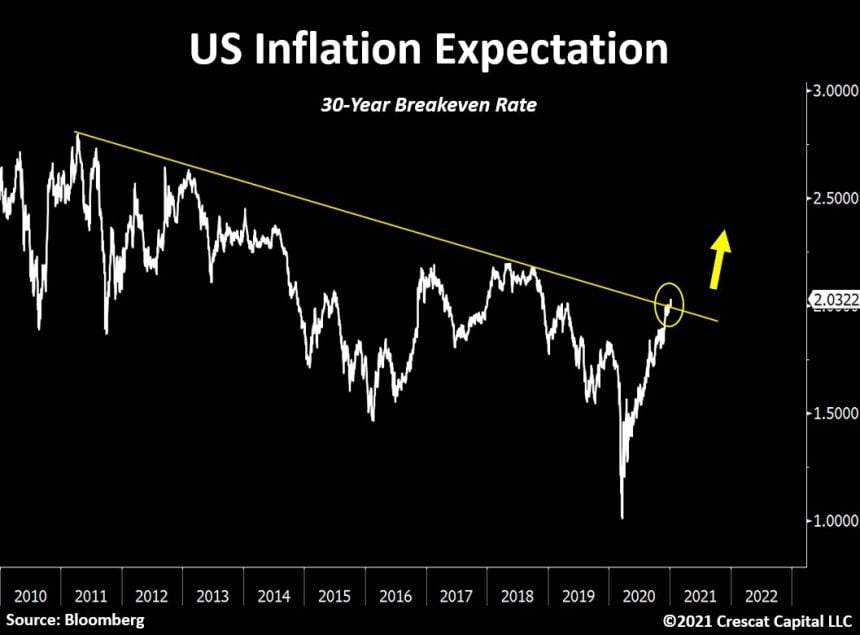 And with US inflation expectations, according to Bloomberg data, breaking out of a decade-long downtrend, Bitcoin could soon become even more attractive than it already is to investors.

Bitcoin was designed to have certain attributes that made it similar to gold – an asset the cryptocurrency’s creator was particularly fond of. Chiefly, to ensure the decentralized <span class="wpg-tooltip-term-title">Coin</span></h3><div class="wpg-tooltip-content">A coin is a unit of digital value. When describing cryptocurrencies, they are built using the bitcoin technology and have no other value unlike tokens which have the potential of software being built with them.<p class="wpg-read-more"><a href="https://www.newsbtc.com/dictionary/coin/">» Read more</a><p></div>”>coin was scarce, rare, and something people would want to “collect” Nakamoto hard-capped the supply at just 21 million BTC.

The richest individuals in the world are now buying Bitcoin to prevent their wealth from evaporating into thin air. And if inflation expectations are only now breaking out from a ten-year downtrend, Bitcoin’s uptrend might only just be getting started.

From the time stimulus money began flowing in response to the pandemic, through now, the leading cryptocurrency by market cap has grown nearly 800% and added billions to its market cap.

From inflation fears alone, it’s easy to see how analysts have come up with such lofty targets for the price of each Bitcoin long term.

Bitcoin’s price action has been quite mixed as of late, with buyers and sellers both vying for control over the...

Bitcoin price started a fresh increase above the $33,200 resistance against the US Dollar. BTC is likely eyeing more upsides...

Bitcoin price declined sharply towards the $28,000 zone against the US Dollar. BTC is currently rising, but it might face...

Bitcoin Uptrend From $20K Has Been Lost According To Parabolic Indicator

Bitcoin has seen some wild price action as of late that has put a short-term end to the cryptocurrency’s extended...