Ethereum has been hovering around the $390 region throughout the past several days and weeks, struggling to break above $400 due to the heavy selling pressure that has been established at this price level.

The cryptocurrency has formed an incredibly tight correlation to Bitcoin, which is currently trading within the upper-$11,000 region.

Analysts are noting that ETH’s ongoing consolidation phase is likely to result in a sharp upwards movement, with one trader setting his sights on a move up towards $440 in the near-term.

This potential uptrend will likely only come about if BTC can shatter the resistance it faces at $12,000.

Another popular trader is also noting that the strong support Ethereum has established around 0.031 BTC is likely to bolster its near-term outlook.

At the time of writing, Ethereum is trading down just under 2% at its current price of $390. This is around where the cryptocurrency has been trading throughout the past week.

Last Saturday, ETH ran as high as $415 before it lost its strength and declined as low as $300 on some major trading platforms. It swiftly recovered the bulk of these losses.

From this point on, it has been caught within the throes of a consolidation phase. Each dip has been aggressively bought by the crypto’s bulls.

Analysts are now noting that Ethereum remains in bull territory so long as it continues trading above 0.031 BTC – which is slightly below its current price of 0.0334 BTC.

This level was established as strong support during the sharp decline seen last week.

“As long as that level hold, hard to be bearish short/medium term,” one trader explained in a recent tweet. 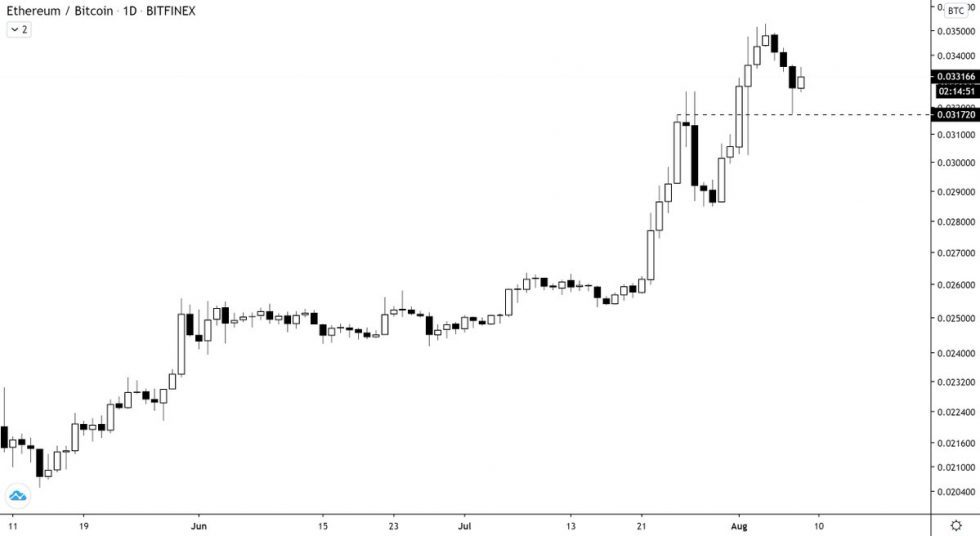 Analyst: ETH May Soon Push Up Towards $440

While speaking about the cryptocurrency’s near-term outlook, one trader noted that he believes Ethereum is well-positioned to see a move towards $440.

He points to the high time frame closes above its support at $370 as positive signs for its near-term outlook.

“ETH / USD: Price action still looking strong HTF right now, no issues to panic as long as we continue to close above $370 on both daily and weekly timeframes, accumulation now… Still think after this breather,

On Wednesday, Uniswap shocked the world when it suddenly released its own token: UNI. The Ethereum-based decentralized exchange launched the...

Last night, Uniswap debuted its Ethereum-based UNI token to the world and began distributing 400 of the suddenly hot tokens...

The Ethereum blockchain has become congested after multiple days of low activity. According to GasNow, an ETH transaction fee tracker,...

This Pivotal Level Could Trigger an Ethereum Correction Under $300

Analysts are fearful that Ethereum could drop under $300 despite strength in Bitcoin and legacy markets. Related Reading: This European Crypto...

Ethereum 2.0 Moves Closer But Hoskinson Raises Doubts Over its Security