XRP’s Key Support is Taking a Bashing, Putting it at Risk of Capitulation

Bitcoin lost its support at $7,000 earlier today, subsequently leading XRP and virtually all other major altcoins to post notable retraces that have cut into the gains incurred as a result of the recent market-wide uptrend.

It now appears that XRP is at risk of seeing even further downside due to its key near-term support level taking a “bashing” as bulls struggle to defend against intense selling pressure.

This could also be further perpetuated by Bitcoin’s current weakness as it hovers just slightly above its critical near-term support at $6,800.

At the time of writing XRP is trading down just under 5% at its current price of $0.184, which is right around its key support that has been established throughout the past few weeks.

Today’s decline has led the crypto down from daily highs of $0.195 that were set just a few hours ago, with the decline coming about in tandem by that seen by the benchmark cryptocurrency.

Bitcoin previously gained what appeared to be a stable foothold within the lower-$7,000 region, even surmounting the previous resistance it was facing around $7,200.

Bulls did not prove to have enough strength to support BTC within this price region, however, and it is now at risk of breaking below its key multi-week support that has been established around $6,800.

If Bitcoin breaks below this level, it is highly probable that it will cause altcoins like XRP to similarly see some intense downwards momentum.

XRP may be particularly impacted by this potential BTC downtrend, as the cryptocurrency has a history of being prone to underperforming Bitcoin during weak market conditions.

Analysts believe that XRP is poised to see significant near-term weakness due to a dwindling multi-week support level that it is currently in the process of testing.

This support exists between roughly $0.177 and $0.182, and has held strong on multiple occasions throughout the month of April.

One popular pseudonymous trader on Twitter spoke about this level in a recent tweet, explaining that he doesn’t believe it will be able to hold strong for too much longer, offering a chart showing downside targets at $0.162 and $0.142 respectively.

“XRP – I don’t think this support is going to take much more of a bashing,” he said while pointing to the below chart. 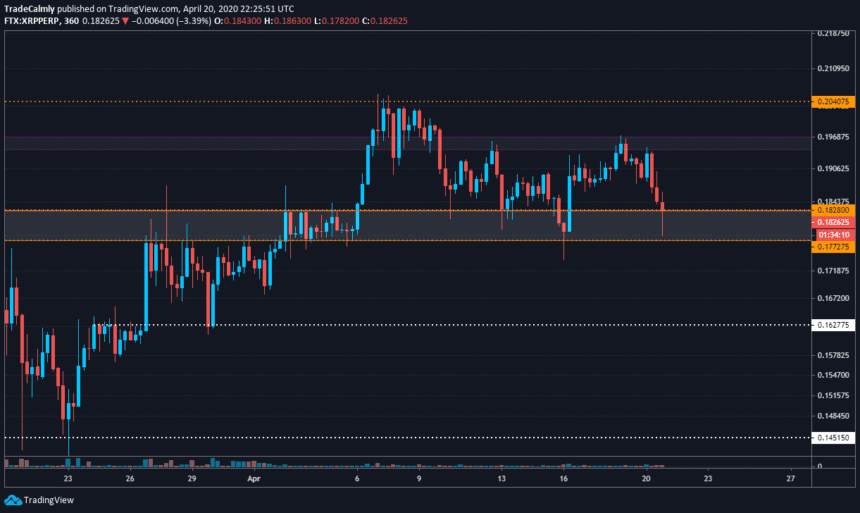 Yesterday, the world was aghast as they watched oil prices tumble into negative territory for the first time in history....

2020 has been a particularly rough year for Litecoin, with the crypto closely tracking Bitcoin’s price action and trading right...

No, Americans Are Not Buying Crypto With Stimulus Checks

Despite Bitcoin continuing to consolidate above $7,000 as other crypto assets have shown signs of strength, analysts have still been...

From the peak in February, XRP has fallen off by just under 50%, crushed under the pressure of a bear...

Daily Chart Suggests Bitcoin At Risk of Extended Correction To $10,500

It’s “Do or Die” For Bitcoin: Here’s Why Analysts Think So

ETF Manager CEO: Bitcoin Has Cemented Itself As A Dollar Alternative