Bitcoin’s price reclaimed the $7,500 handle on Wednesday after plunging to its lowest level in over six months.

Wednesday’s roller coaster session saw bitcoin’s price breach $6,900 for the first time in over six months. The largest cryptocurrency would eventually find bottom at $6,847.72 on Bitstamp. 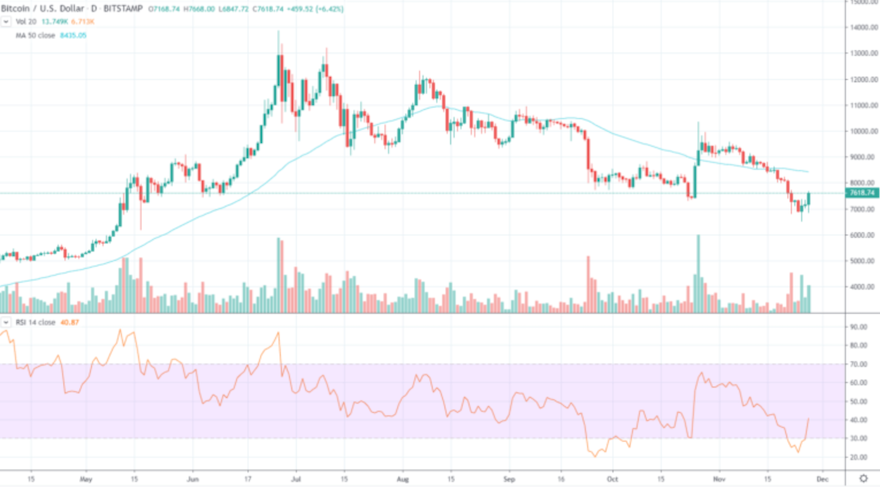 Bitcoin has bounced off extreme overbought levels but remains in a descending channel that began in late October. An RSI reading of around 40 suggests further downside pressure is possible.

While it’s too early to declare a shift in sentiment, bitcoin’s price formation looks like a “textbook inverse head & shoulders,” according to Mark Yusko of Morgan Creek Capital. This formation implies that upward movement is likely once the final trough is made.

Not sure you could actually draw a more perfect example of a textbook inverse head & shoulders formation… 🚀 https://t.co/VYwya8dinC

Bitcoin’s price action exerted a gravitational pull on the wider cryptocurrency market, as altcoins and tokens rallied from recent lows. Cryptocurrencies recovered more than $15 billion in lost market cap, reaching a high near $206 billion, according to CoinMarketCap. 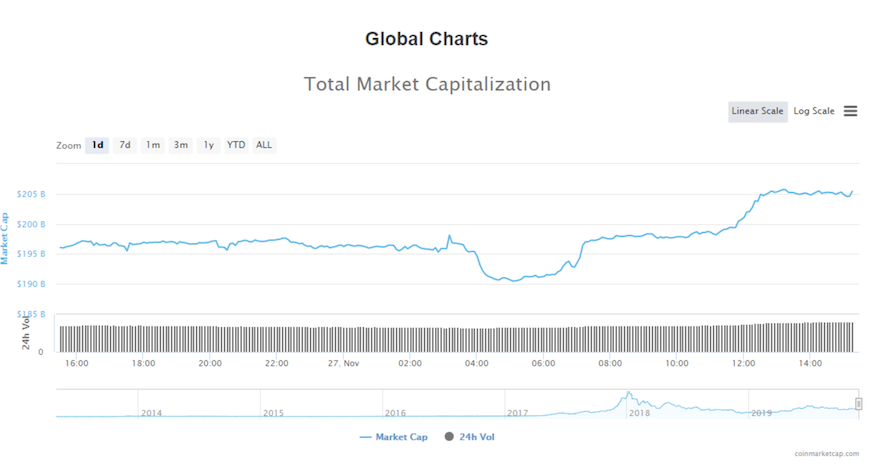 Market Sentiment Favors the Bears, but Bitcoin Is Not Dead

The return of crypto winter has caught the attention of mainstream media, which has been promoting the idea of bitcoin’s inevitable demise. Declaring bitcoin dead is nothing new; the largest cryptocurrency has already ‘died’ a total of 378 times.

Of course, bitcoin isn’t dead. But that doesn’t make understanding its price trajectory any easier. As a non-correlated asset, bitcoin moves independently of the broader market. Even those claiming that central-bank quantitative easing is ‘good for bitcoin’ are incorrect in their assertion. There simply isn’t enough evidence to suggest that BTC’s moves are caused by monetary policy or macroeconomics.

Bitcoin does, however, respond to market sentiment. A look at bitcoin’s Fear & Greed Index reveals a market that is in “extreme fear,” which means ample short positions and an exodus of retail traders.

Bitcoin price has once again found itself trading just below its most important resistance: $10,000.If the first-ever cryptocurrency can break...

Ethereum has been caught within a bout of sideways trading throughout the past several days and weeks, struggling to garner...

Ethereum is still down by over 80% from its all-time high, but that hasn’t stopped cryptocurrency users from increasingly adopting...