The price of Bitcoin dropped below $16,400 on the day following a massive short-term correction. On-chain analyst Willy Woo attributed the pullback to an overheated bull run.

Before the pullback happened, the Bitcoin derivatives market showed signs of extreme buyer demand. The market was dominated by buyers and long contract holders, leaving BTC vulnerable to a crash.

After the market settles and stabilizes, Woo said that the next few weeks could be an ideal time to accumulate at lower prices. 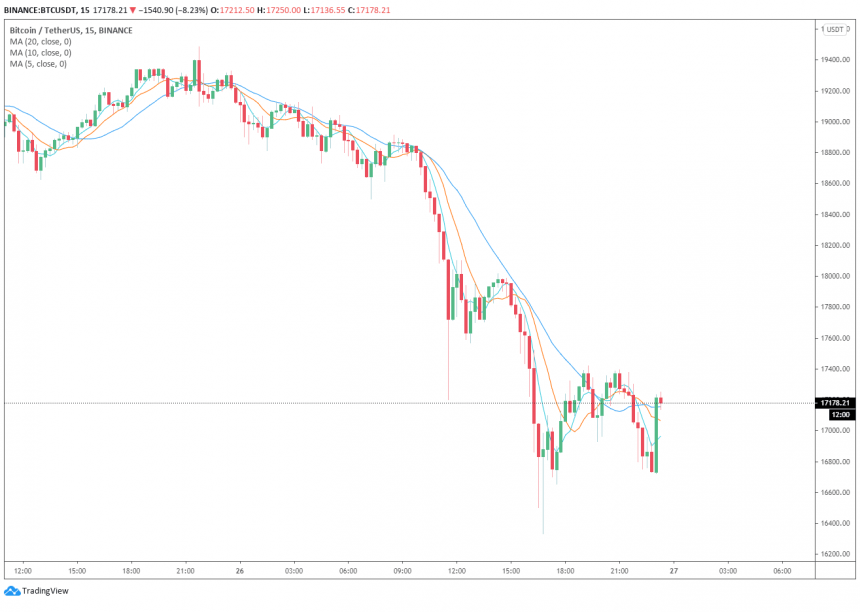 Traders and analysts generally predict several weeks of consolidation to occur. The sudden drop of Bitcoin happened in such a short period that it wrecked order books and decimated the market.

The futures market would need time to rebuild its open interest and to see the appetite to trade BTC after a massive drop. Close to $2 billion worth of futures contracts were liquidated today, making it one of the worst market crashes alongside the March 2020 drop.

As such, in the next several weeks, Woo noted that consolidation could occur. He said:

“Margin longs will be spanked until they go short. Was bullishness was way overheated. Exchange flows are neutral; spot sellers are matched with buyers. Fundamentals a great. The next few weeks? A great time to scoop cheap coins for 2021.”

What happens in the Short Term?

Traders say that the recent correction benefits both Bitcoin and the rest of the cryptocurrency market.

$BTC if this swing failure holds, get comfy, things could range for a while. #Bitcoin pic.twitter.com/M3C1NSGvqF

A pseudonymous trader known as “CryptoHustle” said that consolidation would allow Bitcoin to build new momentum to breach the all-time high.

The trader also noted that a consolidation phase for Bitcoin would likely result in another <span class=”wpg-tooltip-term-title”>Altcoin</span></h3><div class=”wpg-tooltip-content”>Altcoin is defined as any cryptocurrency except for Bitcoin. “Altcoin” is a combination of two words: “alternative Bitcoin” or “alternative coin”. There are over 1,500 altcoins with many more planned for release.<p class=”wpg-read-more”><a href=”https://www.newsbtc.com/dictionary/altcoin/”>» Read more</a><p></div>”>altcoin rally. He said:

“This correction on $BTC at ath resistance is the best thing that could happen to the trend… 1. The longer we consolidate the more momentum the $20K breakout will have. 2. $BTC consolidating likely means alts will bounce hard and continue to rally.”:

Bitcoin faces the prospects of undergoing a massive downside correction as on-chain data shows a plunge in its over-the-counter deals....

It’s no secret that Bitcoin’s recent parabolic rally has done little in the way of providing tailwinds for altcoins, with...

Bitcoin price extended its upward move and traded to a new all-time high near $29,250 against the US Dollar. BTC...

Bitcoin has been explosive all of 2020, and while certain altcoins like Ethereum and a slew of DeFi tokens have...

FUN and Games: Altcoin Drastically Pumps And Dumps Against Bitcoin