Silver Fractal: Are Crypto Altcoins On the Cusp of an Explosive Surge?

A fractal has been discovered in silver and altcoins that mimics the early days of Bitcoin. Silver is already on the move, starting to follow the fractal, but the crypto market is lagging behind. If – like Bitcoin has followed gold – altcoins continue to follow silver, an explosive surge is just around the corner.

According to a fractal discovered by one crypto analyst, both silver and the total altcoin market cap appear to be mimicking early Bitcoin. Notably, the two assets classes are following the path of Bitcoin’s bear market bottoming process that took place from 2015 through 2016.

Altcoins and silver have remained in a similar sideways accumulation range, where investors may have been loading up on the scarce assets ahead of a markup phase.

The same sort of bottoming pattern also played out in the gold market, and the asset not only has been in an increasingly strong uptrend, but it has recently set a new all-time high.

If the assets do continue to follow the original crypto asset’s bear market bottoming fractal, as soon as the range is broken, an explosive pump takes place next. Silver just had its surge, nearly doubling in value over the last month. Is it now altcoins time to shine? 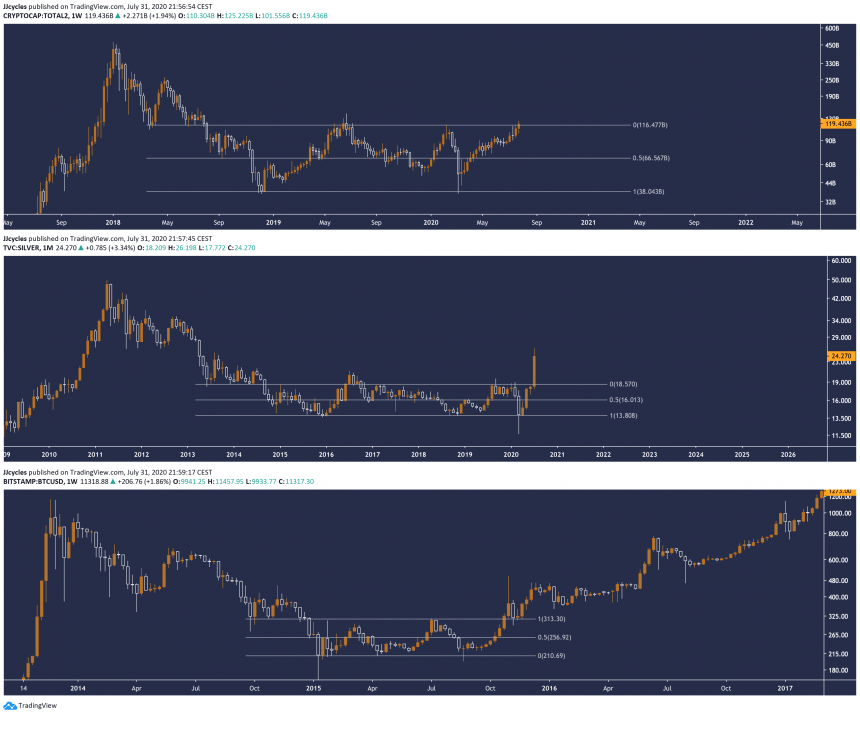 Will Crypto Follow Silver and Gold As The Fractal Suggests?

Fractals are repeating patterns that play out in price charts of financial assets like crypto. However, they are a polarizing topic in the trading world. Some analysts claim fractals only cloud judgment, while others give ample credence to the repeating patterns.

These repeating patterns are found all over nature, in everything from snowflakes to the veins of leaves, and are often based on geometrical shapes and Fibonacci ratios. Geometrical shapes drawn on price charts can tip traders off to

Bitcoin has faced some turbulence throughout the past couple of days. Following the benchmark cryptocurrency’s firm rejection at $12,000 this...

After months of consolidation, Bitcoin broke free from a tight, boring trading range and continued the uptrend that began in...

A perfect storm of ICOs, Bitcoin, and an emerging finance industry full of unknown tech born from mysterious figures helped...

Barstool Sports president Dave Portnoy has been amassing a notable following throughout the past few weeks due to his stock...

Bitcoin Topside Bias Vulnerable Unless It Surges Past 100 SMA

Bitcoin is struggling to gain bullish momentum above $11,300 against the US Dollar. BTC could extend its decline unless it...