Following a sharp decline to $9,400 earlier today, Bitcoin has caught some upwards momentum that is now leading it up towards the five-figure price region.

This volatility does appear to be favoring buyers, as it has allowed Bitcoin to erase a significant amount of the losses that came about as a result of its recent decline to lows of $8,600 on BitMEX.

The crypto is still down from highs of $10,400, and it remains unclear as to what could give BTC enough strength the surmount the intense resistance existing around this area.

If the benchmark cryptocurrency is able to push higher in the days and weeks ahead, it is a strong possibility that buyers will move to invalidate the triple-top formation that has been emerging, while also targeting new yearly highs.

Analysts think this is a serious possibility, as there are a few factors that have led traders to believe that a movement to $14,000 is imminent.

At the time of writing, Bitcoin is trading up just under 2% at its current price of $9,750.

The upswing that sent it to these highs came about after bears attempted to spark a downtrend earlier this morning when they pushed it to lows of $9,400.

Almost instantly after touching these lows, the crypto found a significant amount of momentum that led it up to its current price levels.

This reaction has sparked what appears to be a short-term uptrend, but the resistance that exists directly around $10,000 is incredibly strong and may prove to be insurmountable.

One analyst explained that he believes Bitcoin is poised to rally up towards $11,000 in the near-term, noting that this is where its major diagonal log resistance exists.

“The price should continue to climb until we hit the major diagonal log resistance in the 11K range,” the analyst noted.

Why One Trader Thinks BTC Could Soon Reach as Far as $14,000

He recently explained that after breaking the resistance within the mid-to-upper $9,000 region earlier this week, it has now confirmed it as support.

Because of this, he reckons that the crypto is poised to push as high as $14,000 in the weeks ahead.

“Don’t lose sight of the HTF…Our prior resistance region has now been broken and is now being tested as support. Bulls remain in control and gunning for the highs again imo. HTF has been bullish since posting this weeks ago,” he explained while pointing to the below chart. 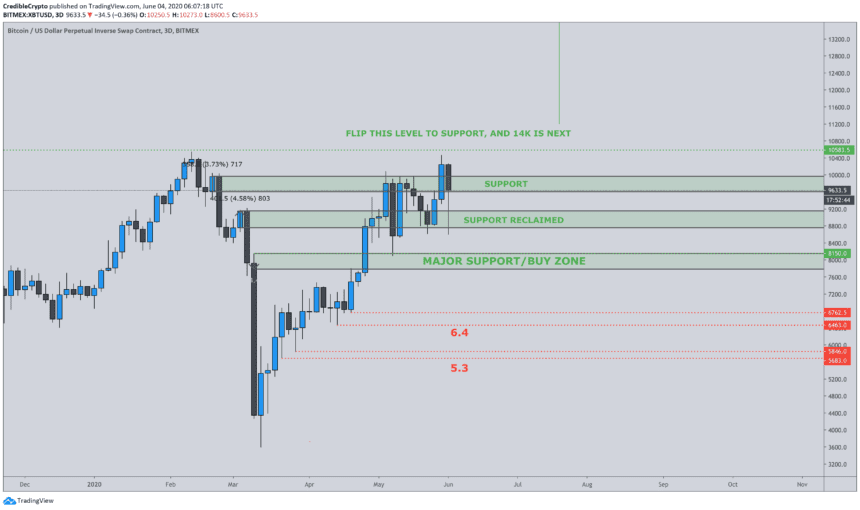 If Bitcoin faces another swift rejection within the lower-$10,000 region, however, it could be a clear sign that the crypto is not ready to push any higher.