Bitcoin faced a grim rejection at $9,500 earlier this week that has caused its price to flash some notable signs of weakness.

This rejection has now caused the crypto to set another “lower high” – further bolstering the bear case and causing BTC to be prone to seeing further near-term downside.

One analyst is now noting that he anticipates the cryptocurrency to push slightly higher as bulls attempt to reestablish their strength.

From here, he believes that it will face another rejection that causes it to slide lower, leading Bitcoin into the $8,000 region.

He isn’t alone in this belief either, as another popular trader recently explained that the benchmark digital asset is far weaker now than it was when it was trading between $9,000 and $9,300 previously.

This means that it could be prone to breaking below the lower boundary of this range and seeing major near-term losses.

At the time of writing, Bitcoin is trading down just under 1% at its current price of $9,170.

Throughout all of yesterday, its buyers were attempting to hold its price above $9,200, but the support found here has since degraded.

It now appears that BTC is positioned to see further downside, as it is slowly inching lower as buyers fail to drum up any major support.

Now that it is back within the trading range that has been established throughout the past couple of weeks, where it trends next will likely depend on its reaction to its support at $9,000 and its resistance at $9,300.

As NewsBTC reported yesterday, one analyst recently explained that this trading range is far weaker now than it was prior to the failed breakout and rejection at $9,500.

As such, the crypto could be prone to sliding beneath its lower boundary and seeing major losses in the days and weeks ahead.

“Bitcoin – Closing back into this previous range would make BTC incredibly weak, especially compared to alts that are making new local highs,” he noted. 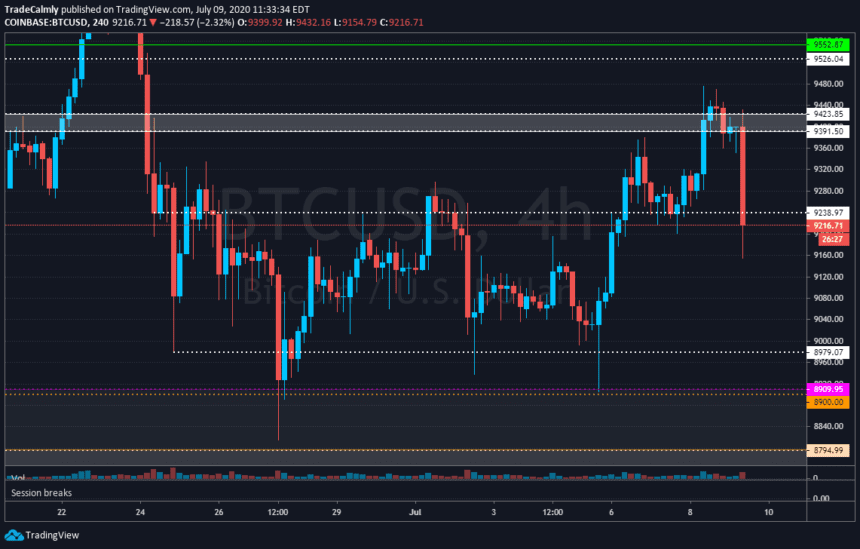 Another respected analyst recently explained that he anticipates Bitcoin bulls to attempt to drum up further support in the near-term, potentially causing the crypto’s price to rise slightly.

He does add that this is likely to be followed by a sharp rejection that sends it reeling lower.

“BTC: Price dropped over 2% with a 4-hr candle close below daily open