Bitcoin price falls to it’s lowest level since the beginning of the year as a cryptocurrency-wide market rout continues to cause pain for holders of bitcoin, ethereum, Ripple’s XRP and other major digital tokens.

The bitcoin price fell to a low of $3,563 earlier today, down around 6% over the last 24 hours according to the CoinDesk bitcoin price tracker, before rebounding slightly. Earlier in the week, a bounce in the bitcoin price had led some to speculate the worst was coming to an end for the bitcoin and cryptocurrency market.

Bitcoin is down some 80% from its all-time highs at the end of 2017, a drop which has dragged many other coins down as much if not more, as investors worry long-expected institutional investment in the sector will fail to materialize. The latest downturn follows a report of Bloomberg analysis of technical data that suggests the bitcoin price could be heading into a “negative pattern.”

The Average Directional Index (ADX) a technical indicator that rises as negative selling trends strengthen, is at its highest level since July, Bloomberg reported. The ADX is currently around 47 and if it crosses 50 it will be the first time it does so this year in a negative pattern, according to Bloomberg.

“There’s little to prevent fading Bitcoin prices from reaching the continuous mean of $1,500,” wrote Bloomberg analyst Mike McGlone in a note, indicating a drop of 60% from bitcoin’s current price.

The bitcoin sell-off, which has been labeled crypto winter, was sparked by a so-called hard fork in the bitcoin cash cryptocurrency after developers and miners failed to agree on updates to the coin’s network. 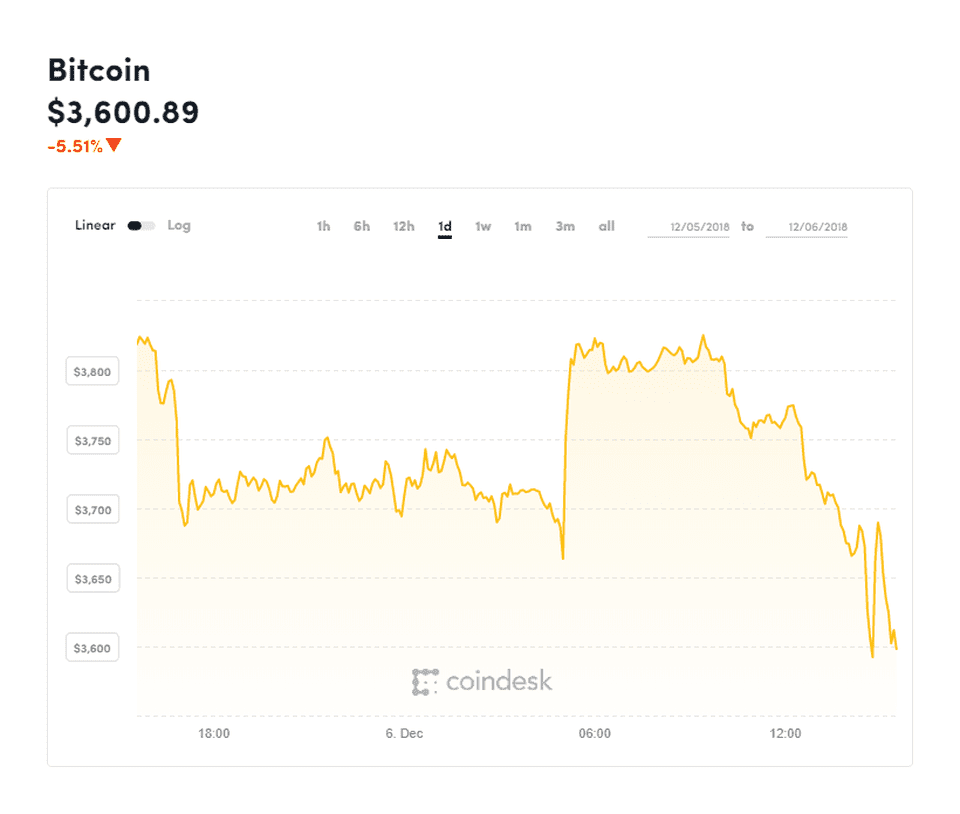 The bitcoin price appeared be rebounding yesterday before taking a dive today. (coindesk)

The ensuing computer power war, which turned nasty as the two camps struggled for control of the bitcoin rival, resulted in many cashing out of the bitcoin and cryptocurrency holdings, afraid major holders could be about to abandon their positions to hurt one another.

“We’re at a classic psychological stage where the market is reversing the 2017 frenzy,” said McGlone in an interview with the newswire’s TV station. “The hard fork was a key trigger that signaled the technology is way too nascent. You had these dicey characters threatening to destroy each other and institutions said ‘It might be best if we stay away from this for a while.”

After months of relative stability, bitcoin volatility exploded in November, with bitcoin recording its steepest monthly plunge in seven years and sparking speculation the bitcoin experiment could be coming to an end.

Adding to bitcoin’s woes the U.S. Securities and Exchange Commission (SEC) has cracked down on the crypto space, in recent weeks, fining two companies last month that hadn’t registered their initial coin offerings as securities.

Last week, the head of the SEC said that concern over a lack of investor protections means he is minded not to approve a closely-watched bitcoin exchange-traded fund application. A decision from the SEC is expected at the end of December.

Elsewhere, other major cryptocurrencies also took a beating. Ripple, the informal name for the XRP token, is down some 5% over the last 24 hours, while ethereum is off by almost 9% and stellar is down 10%. 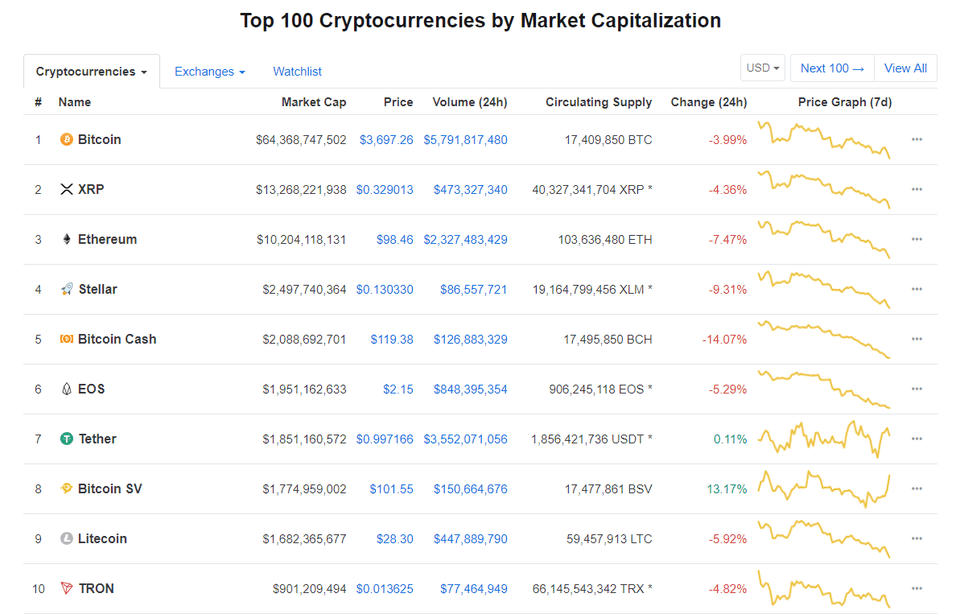 Bitcoin cash, which was the subject of a hard fork and hash war last month, led the sell-off today. (coinmarketcap)

Meanwhile, Miami-based blockchain and telecoms company UnitedCorp has launched a lawsuit against bitcoin mining company Bitmain, website bitcoin.com, Roger Ver, who runs the bitcoin.com website, and the Kraken bitcoin exchange over what it calls a “scheme” to take control of bitcoin cash for “personal gain.”