Bitcoin Miners Are Dumping BTC At a Faster Rate Post Halving, But Why?

Bitcoin’s halving is nearly a full month behind us, yet no new uptrend or post-halving selloff has happened. Oddly, Bitcoin price has traded relatively sideways since.

One metric that has changed since the halving, however, is the amount of BTC miners are dumping into the market. But why, and when will they begin to hold for higher prices?

Bitcoin’s recent halving was the most anticipated event the crypto asset has ever experienced. During past halvings, the crypto world had no idea what to expect in the days, weeks, and months following.

But past cycles have shown that Bitcoin goes on parabolic rallies almost immediately after the block reward reduction.

Each halving cuts the BTC reward miners receive in half. The latest halving saw this figure drop from 12.5 BTC to just 6.25 BTC.

The overnight reduction causes a sharp increase in the cost of production.

Analysts have long concluded that once this happened, miners would then start to hold their BTC for marked-up prices rather than sell at a loss.

But the opposite has happened – Bitcoin miners are dumping even more of their holdings than ever before, according to a metric called Miners Rolling Inventory. 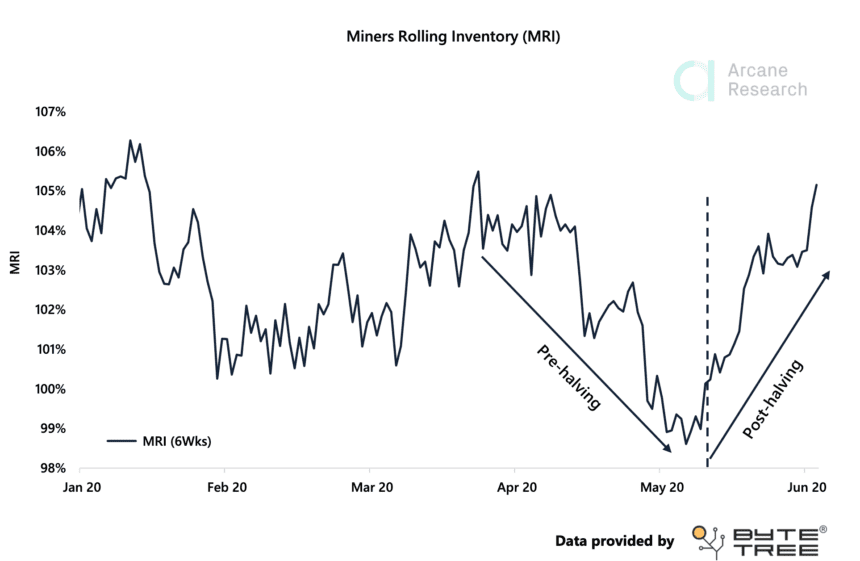 The Reasons Bitcoin Miners Are Dumping More Than Ever

Miners Rolling Inventory tracks the discrepancy between what miners receive each day in block rewards and what they move to exchanges to sell.

A Rejection At This Level Could Result in Bitcoin Falling to $8,000

An MRI of under 100% suggests that miners are stacking their sats and holding them for higher prices.

Over 100% MRI indicates that miners are moving more than they are generating each day, thus tapping into reserves.

Following the halving, not only did miners not slow down their selling of BTC as expected, they have begun tapping into reserves. But why?

The reason is simple: to make up for lost revenue.

The cost of production doubled as soon as the halving hit. BTC that was mined for far cheaper is now being sold at a higher rate to offset losses incurred from the increase in operating expenses.

The weakest miners also may be closing up shop and selling off all remaining holdings, further skewing figures.

What’s interesting is that although the amount of BTC being sold by miners has increased sharply, Bitcoin price has yet to fall from the spike in selling.

All this new selling is being gobbled up by the likes of Grayscale Investments and eager crypto investors seeking to get in ahead of the next bull market.

Like all assets, valuations are dependent on supply and demand dynamics.

Once all weak miners are purged and stockpiled reserves begin to run shrink, miners will have no choice but to begin to hold for higher prices or also will be forced to capitulate.

When the selling finally does slow, demand will take

A Rejection At This Level Could Result in Bitcoin Falling to $8,000

Bitcoin is pushing higher as it has normally done over past weekends. The price of the leading cryptocurrency currently is...

These 5 Technical Trends Show Bitcoin Could Drop After Passing $11k

Bitcoin has pushed above $11,000 after consolidating under that pivotal resistance for a number of days. The leading cryptocurrency now...

Bitcoin is About to Tap a “Do or Die” Level; Will Bulls Break It?

Bitcoin’s price action has been somewhat stagnant as of late, with the selling pressure found throughout the lower-$11,000 region proving...