Bitcoin is now flashing some immense signs of strength as its price pushes up towards its yearly highs of $11,400. This comes as Ethereum, and many other major altcoins, also build technical strength.

This ongoing uptrend is being driven by massive inflows of buying pressure that are helping to degrade the resistance established throughout the mid-$11,000 region.

Analysts believe that this could mark the start of the next leg up, which could send BTC to $12,000 or beyond.

This potential leg higher could devastate altcoins, according to one respected fund manager, who claims that a move towards $12,000 could be imminent if BTC breaks above $11,400.

Because Ethereum has been providing Bitcoin with some guidance in recent weeks, ETH may be immune from any type of BTC-induced downtrend.

Bitcoin Flashes Signs of Strength as Analysts Watch for a Move to $12,000

At the time of writing, Bitcoin is trading up over 2% at its current price of $11,350. This marks a notable surge from daily lows of $10,800 that were set yesterday evening when bears attempted to invalidate BTC’s uptrend.

The strong support that bulls were able to build around these lows helped to absorb the selling pressure and subsequently allowed the crypto to rally higher.

It is now pushing up against its key resistance within the mid-$11,000 region, which may be difficult for buyers to surmount in the near-term.

One factor to consider that could have implications for Bitcoin is the massive influx of buy orders that have been backing this latest push higher.

While speaking about this, one analyst offered a chart showing that BTC is breaking out of a bull flag.

“Bitcoin 4 hour – Flirting with a new leg up,” he explained in a recent tweet. 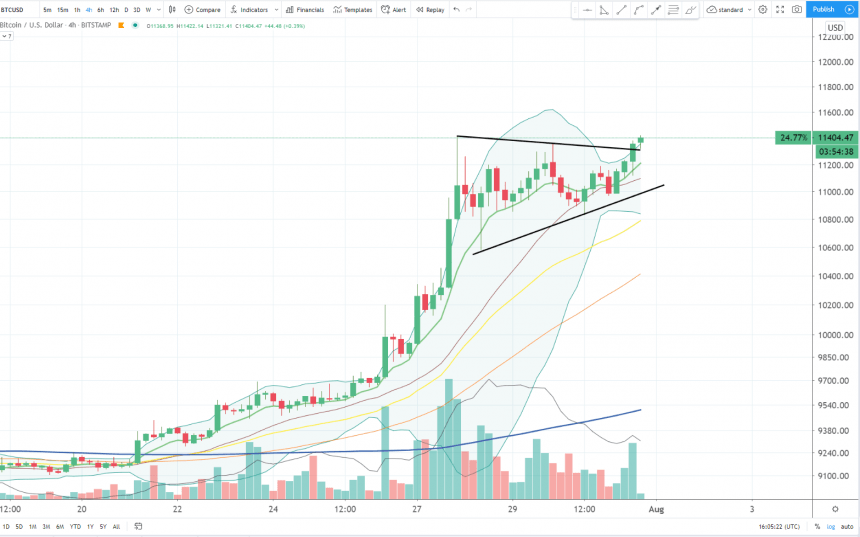 If this resistance is shattered, BTC will likely break into the lower-$12,000 region before facing another influx of selling pressure that slows its ascent.

While speaking about Bitcoin’s near-term outlook, one well-respected fund manager

Several signs now suggest that Bitcoin’s recent pump to $11,000 that failed to hold could have been a bearish retest...

Bitcoin’s price action has given investors mixed signals as of late, with the benchmark cryptocurrency oscillating between $10,000 and $11,000....

Bitcoin price corrected lower, but it found support near the $10,750 zone against the US Dollar. BTC is currently rising...

Bitcoin Whales Aren’t Selling Their BTC; It May Be Boosting Its Price

Bitcoin’s price action has been rather mixed as of late. Although the cryptocurrency has been slowly grinding higher, the lower-$11,000...

Bitcoin as a cryptocurrency underpinning a blockchain network secured by miners leaves the asset’s price susceptible to sell pressure from...