The GTI Vera Convergence Divergence indicator, which investors use to detect trend reversals, sent its first sell signal since mid-March. The shift could suggest further downside may be ahead as the coin flirts with its highest levels of the year. 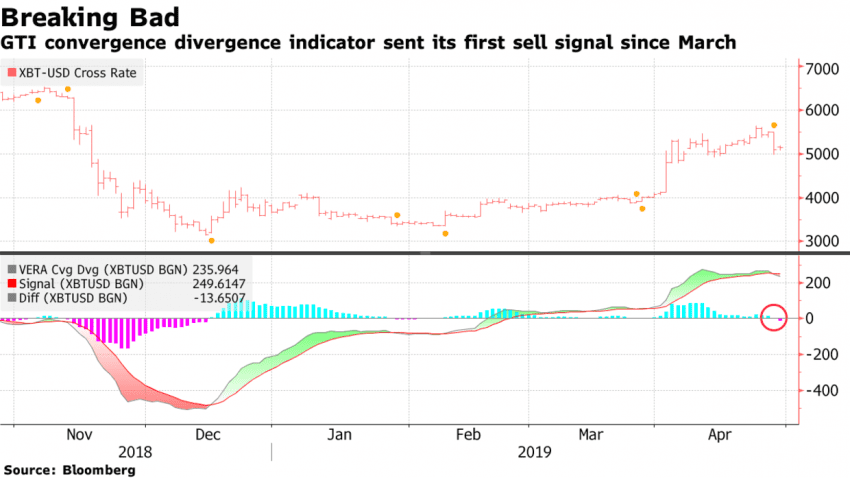 The original cryptocurrency has rallied about 50 percent since January, after tumbling 74 percent last year and surging 1,400 percent in 2017.

In addition, Bitcoin hit the 61.8 percent Fibonacci resistance level, which typically signals support and resistance points, and ricocheted lower. This indicated it could need a positive external factor to break the resistance line of $5,679. Fibonacci analysis is based on the theory that prices rise or fall by certain percentages after reaching historic highs or lows.

“When Bitcoin jumped significantly a few weeks ago, the volume was big enough to push up through major resistance levels into a potentially new trading range,” George McDonaugh, chief executive officer at London-based blockchain investment company KR1 Plc, wrote in an email. “Current movements are natural market cycles within a trading range and it’s just the market searching out the lower bounds,” he said, adding that news about a competing product has stirred some drama and uncertainty in the market.

The crypto market was newly roiled last week after New York’s attorney general accused the operators of the Tether stablecoin and the Bitfinex exchange of participating in a coverup to hide losses of nearly $1 billion in client and corporate funds. Digital currencies tracked by CoinMarketCap.com lost $10 billion of value within an hour of the attorney general’s statement and Bitcoin’s dropped more than 6 percent since then.