Bitcoin looked to end its first official week on a strong note as its price claimed another record high this Friday.

The benchmark cryptocurrency soared above $41,000 for the first time since its inception, hitting an all-time peak of $41,499 before correcting lower. Its gains appeared shortly after the European equities reported profits in early dealings, hinting that traders took their cues from a bullish risk-on sentiment.

Gains across riskier assets appeared after Democrats won key seats in Senate run-off elections this week in Georgia. The victories gave the blue political party control of both Congress houses. For investors, that means an increase in fiscal stimulus measures to aid Americans through the coronavirus pandemic’s economic aftermath.

“This is probably the best news for the economy since vaccines were approved,” Adam Kurpiel, head of rates strategy at Société Générale, said in a note.

Bitcoin analysts have predicted that Mr. Biden’s administration’s larger stimulus measure might usher in inflation alongside economic growth. They have projected the cryptocurrency as an anti-inflation set that would rise higher as the US dollar loses its purchasing power over time.

“Now that Trump has conceded, we can expect Covid Lockdowns to get far worse in the U.S. just like they have in Europe in recent days,” said independent market analyst Elixium. “The Biden [administration] will make very srs attempts to get places like Texas & Florida in Full Lockdown. Bullish for Bitcoin, Bearish for USD.”

But as retail traders raised their bids for Bitcoin against supportive fundamentals, the technicals seem to suggest a massive correction ahead. The cryptocurrency has reached its most overbought levels on all its longer-timeframe charts, amounting to an unavoidable neutralization led by <span class="wpg-tooltip-term-title">Bear</span></h3><div class="wpg-tooltip-content">Bear market is defined as a decreasing set of prices for various types of assets. A bearish investor wants to profit from the movement of dropping prices. You can think of a bear, swinging his big paw downward on the investment, crushing prices.<p class="wpg-read-more"><a href="https://www.newsbtc.com/dictionary/bear/">» Read more</a><p></div>”>bear-induced sell-offs. 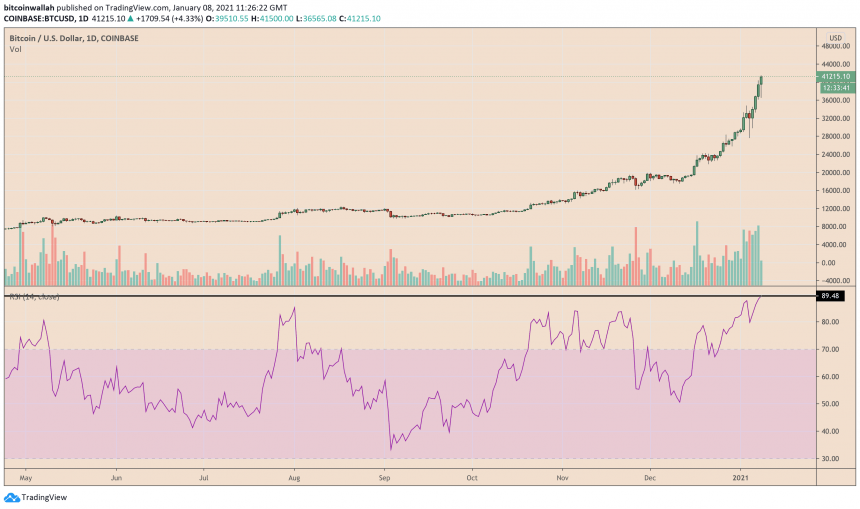 Should a correction occurs, BTC/USD would test $40,000 as its interim support while keeping an eye on $36,000 as its primary downside target.

Don’t Sell Your Bitcoin and Ethereum on RSI Warnings: Analyst

Don’t Sell Your Bitcoin and Ethereum on RSI Warnings: Analyst

A recent volatile run-up in the Ethereum and Bitcoin markets has exceeded their value into “overbought” regions, as per Relative...

The shocking Bitcoin rally has resulted in the cryptocurrency reaching two times its previous all-time high. Meanwhile, most altcoins have...

TA: Bitcoin Corrects From $40K, Why $35K Could Protect Losses

Bitcoin price surged above the $40,000 level before correcting lower against the US Dollar. BTC traded below $38,000, but it...

Bitcoin’s rally has been heating up as of late, with bulls taking full control of its price action as they...

Analyst: After A 50% Retrace Against Bitcoin, Chainlink Is “Ready” To Soar

All the way up until around mid-2020, Chainlink was the hottest crypto token around. But once Bitcoin broke above $10,000...