Altcoins Bleed Out against BTC as Selling Pressure Continues Mounting

Bitcoin has been rallying independent from the rest of the crypto market, which has caused major altcoins like Ethereum to post massive losses against their Bitcoin trading pairs.

This trend has been ongoing for over a month now, with BTC’s uptrend happening in isolation of those seen by other, smaller, altcoins.

One trader is now noting that this trend could persist in the near-term while Bitcoin’s price continues rocketing. He contends that it is best to wait for BTC to stabilize before jumping into altcoins.

Bitcoin Rallies Towards $26,000 as Altcoins Stall

At the time of writing, Bitcoin is trading up nearly 5% at its current price of $25,860. This is around the price at which it has been trading throughout the morning.

This marks a massive rise from daily lows of $24,000 set yesterday morning and shows that BTC is still in a firm price discovery phase.

However, its recent strength has not been enough to create tailwinds for altcoins, as most are still trading down significantly against their BTC pairs.

One trader explained in a recent post that investors are taking on major risks by jumping into altcoins right now.

He notes that altcoins typically cannot gain any serious momentum until Bitcoin cools off and enters a consolidation phase.

“Hope you all had a good Christmas. As expected, altcoins went through some wild chop following those wicks cutting up traders left and right. If there is one thing I’ve learned over the years is that you don’t want to be too aggressive on alts when BTC is trailblazing.” 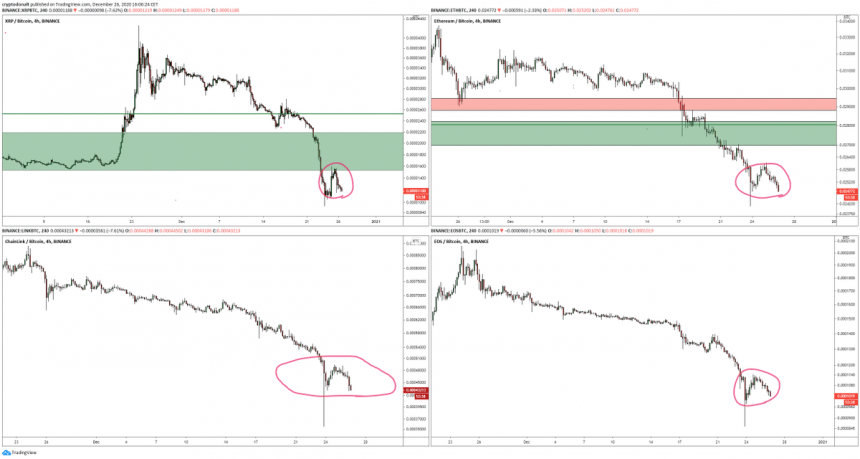 It’s unclear as to just how far Bitcoin will rally before it sees some sideways trading and allows altcoins to move higher, but for the time being, its price action is putting altcoins in a precarious position.

Bitcoin price started a fresh decline after it failed to clear $52,000 against the US Dollar. BTC is sliding and...

A big correction in the Bitcoin market is underway but it should bring good news to its rivaling altcoins,...

Bitcoin price failed to settle above the $50,000 pivot zone against the US Dollar. BTC is now showing bearish signs...