The sharp price movements that characterize Bitcoin’s trend have left different price gaps in the Chicago Mercantile Exchange (CME) Group Bitcoin futures contracts. These gaps tend to get filled later on as the price of BTC develops. The recent 15 percent drop that Bitcoin experienced, in fact, filled a price gap that dates back to mid-June. Now, there is an unfilled gap that could be signaling a bullish impulse despite the current market sentiment.

Price gaps symbolize imbalances created in the market and, at their most basic form, represent a large mismatch between the number of buy and sell orders that have been filled. These usually occur on speculative assets across a variety of markets when there is high volatility after trading hours are closed.

This Overhead Liquidity Region Could Propel Bitcoin Past $12,000

The CME Group Bitcoin futures contracts are open from Sunday to Friday from 5:00 PM until 4:00 PM Central Time with a daily 60-minute break at 4:00 PM. During the most recent rally that saw Bitcoin rise more than 90 percent in June, several gaps were left behind while CME’s trading hours were closed.

Although the latter two price gaps were filled in a timely manner during the end of June, the $540 gap of June 14 took a long time to fill. In fact, after more than three months Bitcoin broke out to the downside of the consolidation period that it entered in June 26 plummeting 15 percent all the way down to $8,160, subsequently filling the gap that it had left behind. 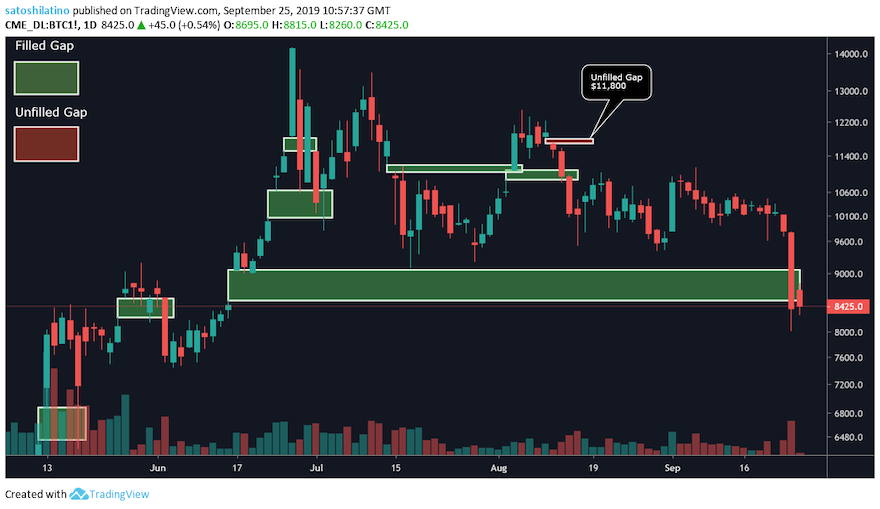 Now that the most bearish gap has been filled, there is still a bullish one that remains open. This one took place from Aug. 9 to Aug. 12 between $11,795 and $11,695. Even though gaps are not always filled in a timely fashion—or filled at all, this $100 gap could indicate that Bitcoin may want to return above $11,700 to rebalance CME’s orders book.

Looking at the technical chart of Bitcoin, we’ve been seeing a squeeze in a descending triangle of the Bitcoin price in the past few days combined with the recent disappointing launch of Bakkt it is clear there is an overall negative macro sentiment in the market.

At the moment, an upswing to $11,700 seems technically unlikely. As a matter of fact, Bitcoin has broken below the lower support of a descending triangle that formed on its 1-day chart. This is considered a bearish pattern with a 31.5 percent target to the downside (determined by measuring the height from the upper to the lower trendline).

From this point, Bitcoin could resume its bullish trend and try to fill the gap between $11,795 and $11,695 that remains open. 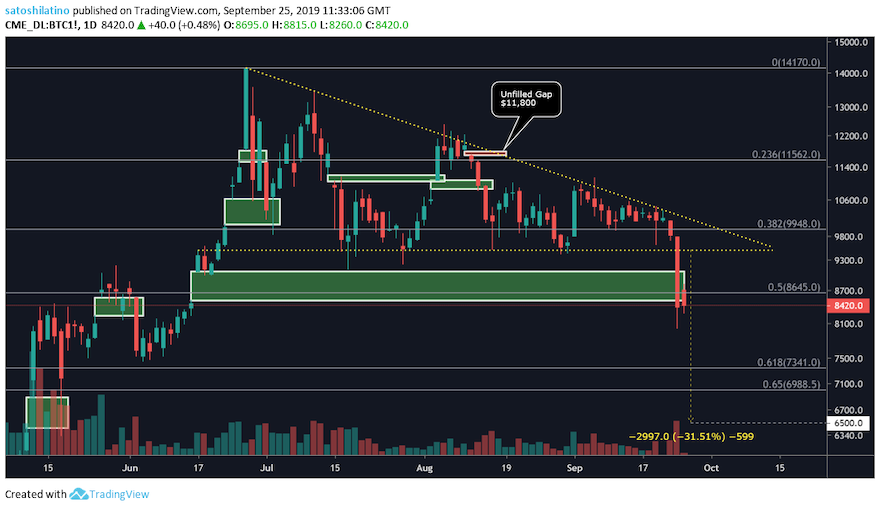 Despite the bearishness seen on Bitcoin’s 1-day chart, Su Zhu, CEO at Three Arrows Capital, believes that Bitcoin is bound for an uprise. Zhu claims that the recent price drop could be the “fuel” needed to clear out over-leveraged positions and that allows this cryptocurrency to reach higher highs.

This Overhead Liquidity Region Could Propel Bitcoin Past $12,000

Bitcoin’s unrelenting consolidation phase may not last for too much longer. Analysts are now explaining that the cryptocurrency is beginning...

XRP, the fourth-ranked cryptocurrency in the space, has been among the industry’s worst performers. Yet investors in the asset still...

Last Time This Volatility Gauge Was This Low, Bitcoin Dove 50% in 2 Weeks

It may seem like a cliche at this point but Bitcoin’s volatility levels are extremely low. This is a byproduct...

Data: Bitcoin Is In Accumulation, and That Means $10k Could Soon Break

Bitcoin price continues to trade sideways for several weeks now, bringing the asset’s notorious volatility to a chilling halt. This...

Bitcoin’s recent mining rewards halving that took place just a couple of months ago went off without a hitch and...