Bitcoin was struggling to resume its explosive upside action on Friday as it felt the pressure from a so-called China FUD level.

The offbeat cryptocurrency earlier this week plunged by more than 4.5 percent right after it established a new year-to-date high above $10,500. The move served as a reminiscent of a similar climb-and-rebound from October last year which took place against the backdrop of China’s blockchain endorsement.

In retrospect, President Xi Jinping praised bitcoin’s underlying technology for its potential in rebuilding China’s digital infrastructure. His statements excited bulls in the crypto market that allowed bitcoin to rise by more than 43 percent in just two days to $10,540. 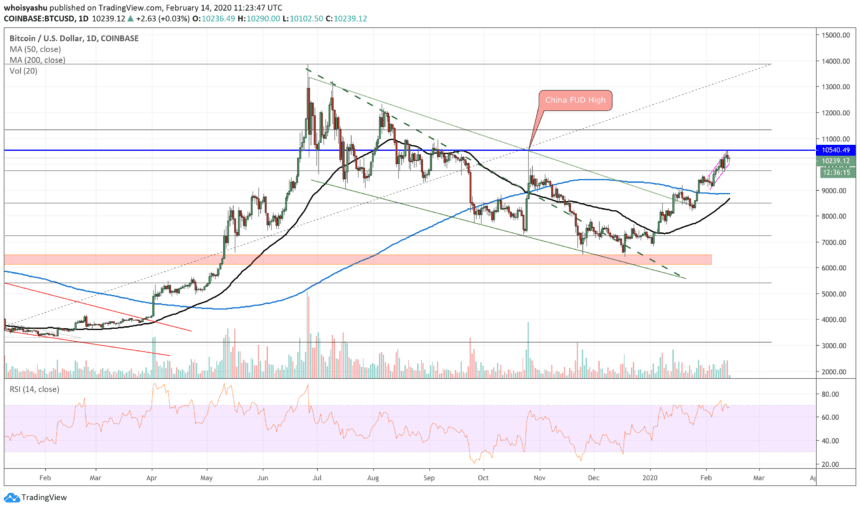 Nevertheless, the excitement cooled down almost abruptly and caused bitcoin to give up its gains in the next trading sessions. Almost a month later, the cryptocurrency had crashed by circa 38 percent.

Bitcoin’s latest upside took its price close to the same China FUD level of $10,540. But, like the previous time, the cryptocurrency failed to maintain its gains and slipped moderately. That led experts to say that bulls were afraid to call fresh long positions above $10,500, fearing upside exhaustion.

Scott Melker, an analyst and full-time trader at Texas West Capital, said $10,540 is the only level that matters now for bitcoin traders, adding a break above it would confirm a long-term bull trend.

Delete everything from your chart. There’s only one line that matters now. A break of this line would be the first macro higher high since the 14K top. Movement above and a flip to support would effectively end the “bear market” argument. Higher high = confirmed bull trend. pic.twitter.com/2dLSWidwoW

Another prominent market expert, Crypto Clark, drew the same conclusion in his YouTube vlog. The trader said if bitcoin could cross over the “China FUD” level than it would be able to flip the level into new support.

Some also believed that bitcoin’s latest rejection of the $10,500-resistance could push its price down below the $10,000-support. Michaël van de Poppe, for instance, said in his analysis that bitcoin could fall to as low as below $9,500 in the coming sessions, adding that the cryptocurrency’s bullish bias would – nevertheless – remain intact.

“Overall I’d say that it’s still healthy and some consolidation will be good before continuation,” added Mr. Poppe.

Bitcoin’s push above the $10,540 level could come on two key catalysts: banking liquidity and halving.

Mainstream analysts believe that an escalation in the Coronavirus outbreak in China could lead central bankers to inject more money into the market. A part of that capital could eventually make its way into the bitcoin/cryptocurrency market.

According to noted analyst Mati Greenspan, bitcoin is currently rallying upwards due to the

On Monday, for the third or fourth day in a row, the price of Bitcoin continued to correct lower....

Ripple found support near $0.2680 and recovered slightly against the US Dollar. XRP price could continue to rise, but...

Here’s Why Bitcoin Bulls Need To Be Very Careful Here: A Big Pullback Is Still Possible

Bitcoin hasn’t fared too well over the past few days, tumbling as low as $9,500 on Monday as sellers have...

Is the price of bitcoin preparing for a massive price rally ahead? Many traders believe so.The optimistic sentiments emerge owing...